As more businesses are being conducted outside the office or on the go, mobile apps usage can be best described as on the rampage. 2015 mobile apps statistics and trends are reaching unbelievably high numbers. For example, as of July 2015, Android users are able to choose between 1.6 million apps in Google Play Store, higher than the 1.5 million apps available to iOS users in the Apple App Store. Also, more than half (52 percent) of all time spent on digital media now is spent on mobile apps. And compared to last year, the average time people are spending on their mobile apps increased by 21 percent this year.

The Best PM and Planning Apps for Android

As the number of smartphone users has surpassed desktop users sometime last year, project management platforms have developed, integrated and are offering mobile versions of their software. GetApp, a business apps marketplace and review site, recently published a list of the best Android apps for project management and planning. These Android apps provide PM tool subscribers an easy way to keep on top and in the loop of their projects even while out of the office. A similar list have been published for iOS devices, as posted here.

Insightly is a popular web-based CRM and project management tool. It has CRM features that help users manage leads, contacts, organizations, vendors and suppliers. At the same time, it delivers an efficient project management experience through its simplified UI, ideal for small businesses. Its mobile app enables users to take Insightly on the road wherever they go, with the same intuitive controls and excellent contacts functionality present in the desktop version. The Android app is frequently updated for more meaningful and relevant features. Podio is a social collaboration and project management tool that helps its users organize and connect everything they work with. It is a highly customizable platform where users can choose from hundreds of apps to help them create the right and relevant set of productivity tools. Its Android app allows users to be on top of their projects and tasks, while giving them the means to manage contacts. Problems have been reported on the notification system, but Podio has responded to the issues and have been working on the problem consistently for a solution. Evernote is a workspace application and service that is known for synchronizing seamlessly across platforms. It allows users to write as soon as they need to, with powerful search and presentation features. Its user-friendly design on its desktop version has been consistently deployed in the Android version, removing any steep learning curve for new users. Users are able to chat, view and edit in real time, and access all their notes and notebooks. They can also clip articles from the web, capture handwritten notes with the camera, and more. 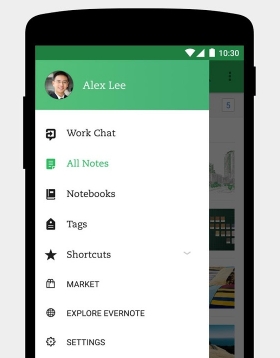 Wunderlist is a cross-platform to-do list with a simplified and familiar user interface. It enables users to plan for any task, organize them in lists, and even share them with others. It has been recognized as one of 2014’s Google Play App of the Year. Users can set due dates and reminders, freeing up the brain for other creative activities other than remembering things. With its beautiful, minimalist design, its Android app allows users to sort and sync tasks and lists with a few taps to any other device or platform.