No matter what project size, job descriptions should be clearly defined. Whether it’s a five-person team or an international collaboration, everyone needs to understand their project roles, the project tasks, and activities each person must complete. One way to define each team member’s role is to use a responsibility assignment matrix (RAM), like a RACI chart.

The RACI acronym stands for “Responsible, Accountable, Consulted, and Informed.” An example of a responsibility assignment matrix, the RACI chart shows the expense at the lowest level of work for the purpose of managing cost and duration. It is a charting system that illustrates the given task’s goal and the required action for each person.

This assists with reducing confusion on expectations, in turn, increasing project efficiency and improving deliverables. In this context, decisions are made more quickly, accountability is clear and workload is evenly distributed. But wait, is the RACI model the be-all and end-all? We will let you know what the project management professionals think.

What Is a RACI Chart?

If you would like to explicitly communicate on a project, a RACI chart can help with that. A RACI chart organizes your project so that everyone knows what’s happening. With RACI, map out who is Responsible, is Accountable, must be Consulted with, and shall stay Informed.

Let’s break it down further. Here is what your project delegation looks like with the acronym RACI:

Even the Project Management Body of Knowledge (PMBOK Guide) has a section for RACI under matrix-based charts. The PMBOK uses RACI as an example of RAM. A RAM serves the purpose of showing which activities belong to project members. For more information about the PMBOK Guide, we wrote an article for you.

What Makes a RACI Chart Useful?

A RACI chart informs the organization about its employees’ workload, as it shows which functional role(s) are assigned to each person. For example, the organization can see if someone has been placed in the responsible role too many times or not.

In other words, does this person have too many or too few particular tasks to complete. That way, the organization knows whether someone has too much responsibility assignment already, or could take on more responsibilities. Use the RACI framework for the successful completion of deliverables, as everyone impacted is in the loop.

This reduces miscommunication and increases productivity. So, if a task was incorrectly completed RACI tells you who was involved and ultimately accountable. In short, RACI makes it easier for you to have the right conversation with the right people. In turn, saving everyone time.

What Do RACI Users Say?

Project managers use RACI matrices. Professionals in the PM field say they have benefited from using the RACI chart tool. It offers these utilities for project managers:

However, the RACI model isn’t a good solution for everyone. Some users have expressed confusion and doubts about its process and effectiveness.

The consult role is unclear. To avoid role confusion, the project manager and the person consulted need to decide whether the consulted will only give direction when asked, or whether they will offer direction when they feel it is suitable, and make sure their input is implemented. 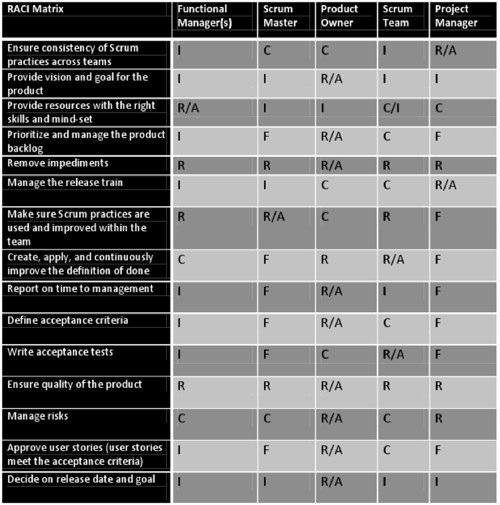 Is RACI Good for Scrum Teams?

Above is a RACI chart example of how one PM used RACI in a Scrum context. To meet the goal of the project, he added F to RACI: Facilitate activities.

To summarize, the person in the F role, Facilitate, organized the activities for the scrum project as illustrated in the RACI chart template above. The use of RACI in a scrum context stimulated an interesting discussion between PM professionals.

Some felt that this model would provide recognition of a job well done, or blame of a poorly executed job, to one person — impacting team cohesion. This way of organizing would impact the fundamentals of Scrum — self organization. Counter arguments included, one must consider the extent to which RACI is applied.

To use RACI to its potential, it is suggested that you find a balance between ridged roles and responsibilities, and flexibility in a self organizing team. Is that possible?

Depending on the setup of the project team, the RACI matrix has variations and alternatives. PMs criticize these because they feel that the variations/alternatives are trying to compensate for the matrix’s original design. If it had been designed well, one version of the matrix would suffice. On the other hand, having alternatives/variations to choose from means that the matrix is flexible to the team’s needs.

RACI is a tool to organize team members in accordance with the goal of the project. If there are aspects of RACI that are too vague, consider that as an opportunity for the PM to think outside the “matrix,” or box, and adapt this tool to their team — providing that is suitable.

How to Make RACI Work for You

As noted above, this type of RACI model is effective. To know how to apply this model you should analyze! Balance is your key to success with RACI. If there are too many or not enough people in each role it slows down the completion of your project tasks or even prevents completion.

To use RACI effectively, you need:

How Do You Strike the Right Balance With RACI?

The RACI model a collaborative effort. Everyone should be comfortable with each role that they and their counterparts have. In short, improve communication and process efficiency with the RACI matrix.

Used to its potential, everyone wins. You will stop receiving unnecessary information, like an abundance of emails that you may not need to read. You will also increase job satisfaction with clearly defined roles.

Using project management software is one of the best methods to help the RACI Matrix succeed. A PM tool will allow teams to track each step of the project and see exactly what responsibilities fall to each team member, when they are supposed to be completed, and when they were actually completed.

Project management software has collaboration tools in which team members can quickly consult and update each other regarding project steps. Teams can effectively act and communicate throughout each installment of the project. Just five of the best PM tools are listed below. They clearly assign and define tasks to eliminate confusion and promote successful projects.

3 RACI Videos You Need to Watch

These first two videos provide you a short snippet of how RACI can work for you. Looking for a longer explanation? Watch video three.

Video 1: The Basics of RACI

This a five-minute video regarding the basics of RACI and how the program can benefit your organization.

Video 2: How to Make Your Own RACI Chart

Video 3: How RACI Will Help You Manage

Take it even further with this video. This 20-minute video will walk you through how RACI will help you manage matters related to efficiency, accountability and role clarification. After you answer questions relating to your organization, this RACI video takes you through a hypothetical situation about what it would look like if no one completed a task, and how RACI can manage it.

In the end, it’s evident that a well-organized team is crucial to successfully complete a project plan. A RACI matrix is advantageous, if not paramount, in achieving this. RACI has proven to be beneficial, yet it has its drawbacks.

Still, consider that with any PM tool finding the one that works the best for you is key.