How We Mixed Scrum with Kanban to Boost Project Development

You definitely want your software development project to succeed. And you are sure that the methodology you’ve chosen is the key to success. That’s why you’re reading this article.

I want to show you how we successfully mixed Scrum and Kanban methodologies in one of our projects. This kind of methodology was created gradually, though it can be used in any project under certain conditions.

In our situation, the model was efficient because it appeared under these conditions:

Below, I will specify why each of these prerequisites is important. But first, some project details will help you to comprehend our mixed methodology.

The enterprise knowledge management system being developed by our team was a B2B platform. Its customers are world-renowned brands; they use the platform for efficient knowledge exchange between different groups of experts. Each customer needed the system to be customized for their specific demands. This is why, in addition to developing new system features and enhancing existing ones, the development team spent some time customizing the system. Under these conditions, task estimates were required more by customers than by the product owner.

The following elements of the Scrum methodology were used in our model:

The main Kanban feature used in our model was the Kanban Board, which is a great work and workflow visualization tool. However, unlike in strict Kanban, in our model tasks received the following statuses:

Process in Our Model

In our methodological model, the whole process was organized in the following way. 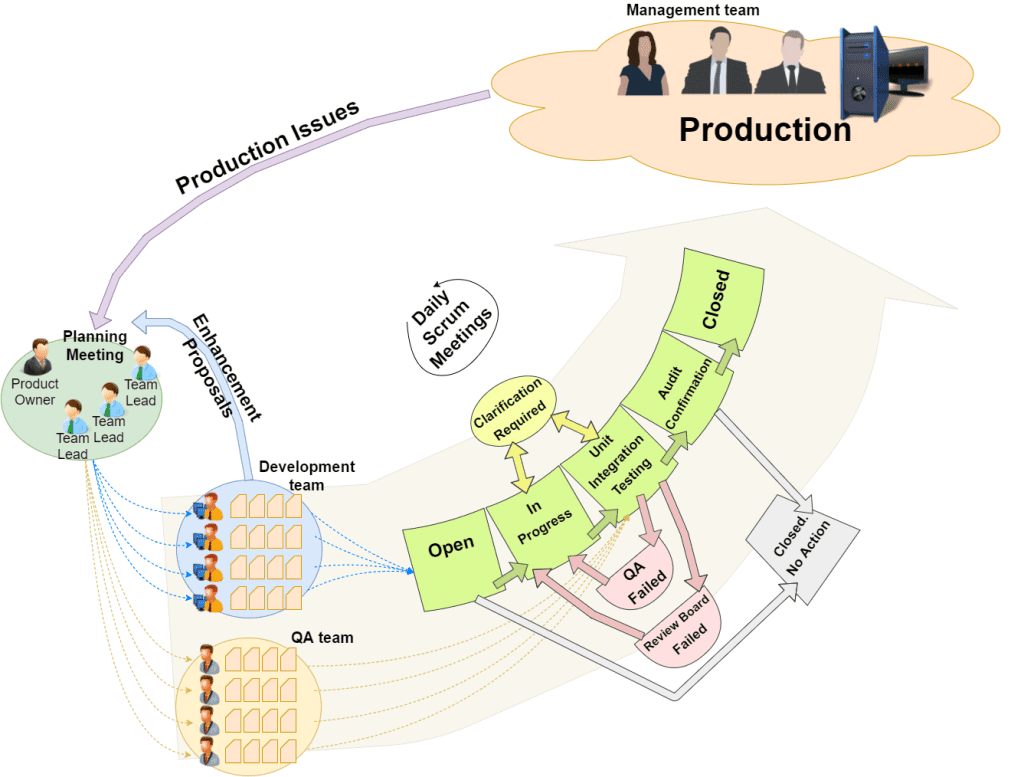 Releases. We planned one release per year. At the beginning of each release, the product owner, together with the team leaders, decided which tasks should be executed, assigned each task to a developer and estimated the time required for its execution. The total estimated time for each developer was not to exceed one year.

Estimates were pessimistic because the aim was to execute every task planned. Deadlines were adaptive and depended on the tasks being performed: a new system version could be only released when all tasks had been closed.

Developers’ work. During the planning period, developers provided refactoring, bug fixing, and upgrading of libraries. If a developer had tasks assigned to him/her, they would select a task and start working on it. Even with pessimistic estimates, some tasks took longer than expected. The main goal was to perform each task in the best way, so that it was successfully tested; it is better to close one task without failing than to start working on a dozen tasks that cannot be closed because of the “QA Failed ” status.

Once all of a developer’s tasks had been closed, he/she could carry out internal tasks focused on code improvements. Our developers were proactive and had already suggested a number of code, architecture, and UI enhancements.

Architecture and UI enhancements should always be approved by the product owner and/or the system customer. The following kinds of tasks don’t require approval and should only be accepted by the team leader:

Like any methodology, and especially mixed methodologies, our model has its pros and cons. I will start with the disadvantages, because they are in the minority.

Here, I have described a successful case of our use of mixed methodology: Scrum + Kanban. We took some elements from each of these approaches and this allowed us to increase our developers’ performance, encourage their sense of responsibility, and involve them in creating and enhancing the system, rather than only developing it. In addition, this methodological model enabled process enhancements—these will be described in a later article.

Vasiliy Soloshchuk
Vasyl Soloshchuk is the CEO of INSART, a U.S. custom software vendor with engineering offices in the Eastern Europe that has been behind the technical success of a more than a score of technology companies from the U.S. and Europe.