From Scrum to Kanban

One change always leaves the way open for the establishment of others. – Machiavelli

Agile software development is not about whether you do Scrum, XP or Kanban. It is about finding a process that works in the environment you’re in. Finding this can be hard, and doing so certainly requires reflection about what you are doing, how you’re doing it and why. One thing’s for sure, if you are doing something and it doesn’t work: Stop doing it!

About three months ago, the project I was working on was facing some problems. We were not able to deliver the features at the pace we wanted. Simply put, what we were doing was not working very well, and if nothing was done we risked missing our end date. Failure is never fun, so we decided to do something about the situation. The following were our main problems: 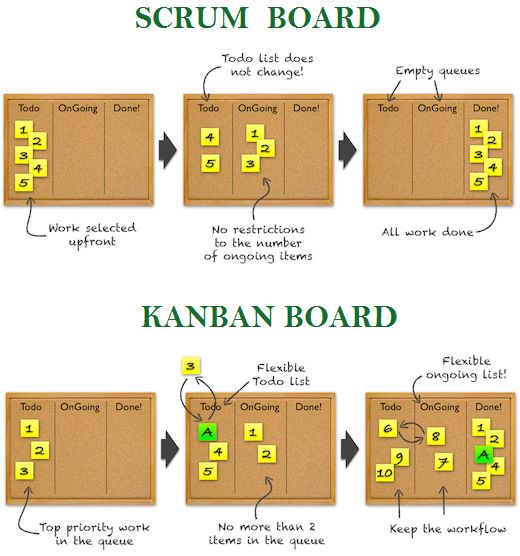 How Kanban was introduced

I had read Corey Ladas Scrumban book and my interest for Kanban was definitely rising. The ideas of just in time, limiting work in progress and small batch sizes to reduce code in inventory (to name but a few), seemed very appealing indeed. And here we were, with a project of reasonable size and complexity, failing to deliver at the required pace. The perfect opportunity for a change. But since I didn’t have any experience with Kanban I really needed some external backing.

The external backing was found in the Scrum vs Kanban article written by Henrik Kniberg1. It is an excellent article, easy to read and it explains the fundamental aspects of the process in a clear and precise manner. The article was distributed to the project manager and the the domain expert on the team in order to test the water. They liked what they read and hence, we decided to talk to the rest of the team about applying such a change.

When selling the change to the rest of the team we emphasized that moving towards Kanban was not a revolution, applying a few changes to our existing process would do for a start.

People fear change. Change disrupts peoples lives. It means learning new things, or doing things differently than they’re used to. Quoting the great Italian philosopher/writer Machiavelli: “And let it be noted that there is no more delicate matter to take in hand, nor more dangerous to conduct, nor more doubtful in its success, than to set up as a leader in the introduction of changes. For he who innovates will have for his enemies all those who are well off under the existing order of things, and only the lukewarm supporters in those who might be better off under the new. This lukewarm temper arises partly from the fear of adversaries who have the laws on their side and partly from the incredulity of mankind, who will never admit the merit of anything new, until they have seen it proved by the event. “

People need to experience for themselves that a change has a positive effect in their work environment. This is more likely to happen if you do small incremental changes. Doing too many things at once will make it hard to determine which change had what affect. With this in mind our decision was to make the following 2 changes:

The observed effect of applying these changes were:

We avoided the trap of doing too many changes too quickly, letting the effect of the first changes appear. Oftentimes, changes to one part of the system will reveal potential problems in other parts. So true in our case. After adding WIP limits and adding system test as a separate station, we observed that if the tasks in progress were truly testable, then this would make it much easier for the testers on the team. A pleasant side effect of this decision was that tasks were now focused on business value and less on technical details (which in many occasions can generate waste)

The move towards Kanban turned out to be a happy move for us. The project delivered on time and under budget. It is my opinion that applying small changes to the process were an important factor. Changing the process using small steps without turning the world upside down, made the effect of the changes highly visible, thereby gaining faith in the new process.