What Is Critical Path in Project Management?

Prioritizing tasks can be tricky. While some activities may look heavier than others, it doesn’t always mean those tasks require the most attention. An important thing to consider is dependencies, or tasks with outputs that are required to start other tasks. Taking dependencies into consideration can make estimating a project’s duration and prioritizing tasks more complex. One useful technique to manage this is the critical path method.

What Is the Critical Path Method?

The critical path method is the process of identifying the string of tasks and dependencies that take the longest time to complete in a project. This group of to-dos is called the critical path, while the tasks inside it are called critical activities.

The total duration of the critical path is the minimum time you’ll need to complete a whole project. Any delay for critical activities will result in extending the total project duration.

How to Identify a Project’s Critical Path

You can find your project’s critical path by using project management tools that use algorithms to find it for you. However, you can also calculate critical path by doing a forward and backward pass.

Start by breaking your project down into milestones, deliverables, and actionable tasks. This helps you visualize the day-to-day activities you and your team have to accomplish to progress.

Here’s an example of all the tasks associated with planning an online press conference:

Once you have all project tasks laid out, identify dependencies, or the tasks that can’t proceed without another’s output. List them out in a table, along with an estimate of how long each task would take.

Returning to the example above:

Step 3: Use a Network Diagram That Traces Dependencies

A network diagram is a series of boxes and arrows that help visualize the connections of specific variables. In this case, it’s used to represent tasks and their relationships. 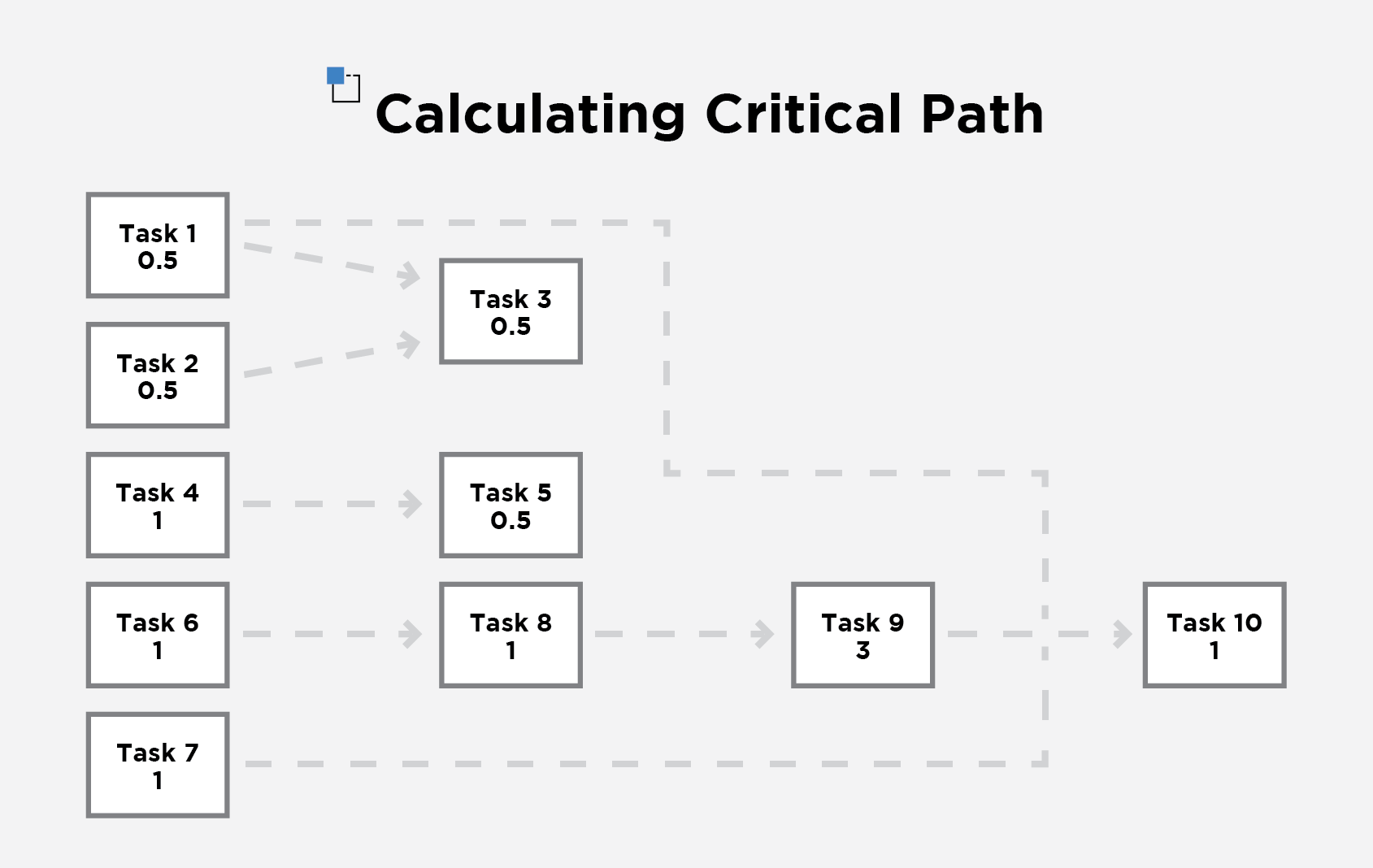 Dependencies point to the tasks that can proceed once they’re finished. For example, “Collect contacts to publications” (Task 1) points to “Send out invites” (Task 3) because Task 3 can only proceed once Task 1 is finished.

Step 4: Do a Forward Pass

There are two variables to consider when doing a forward pass: 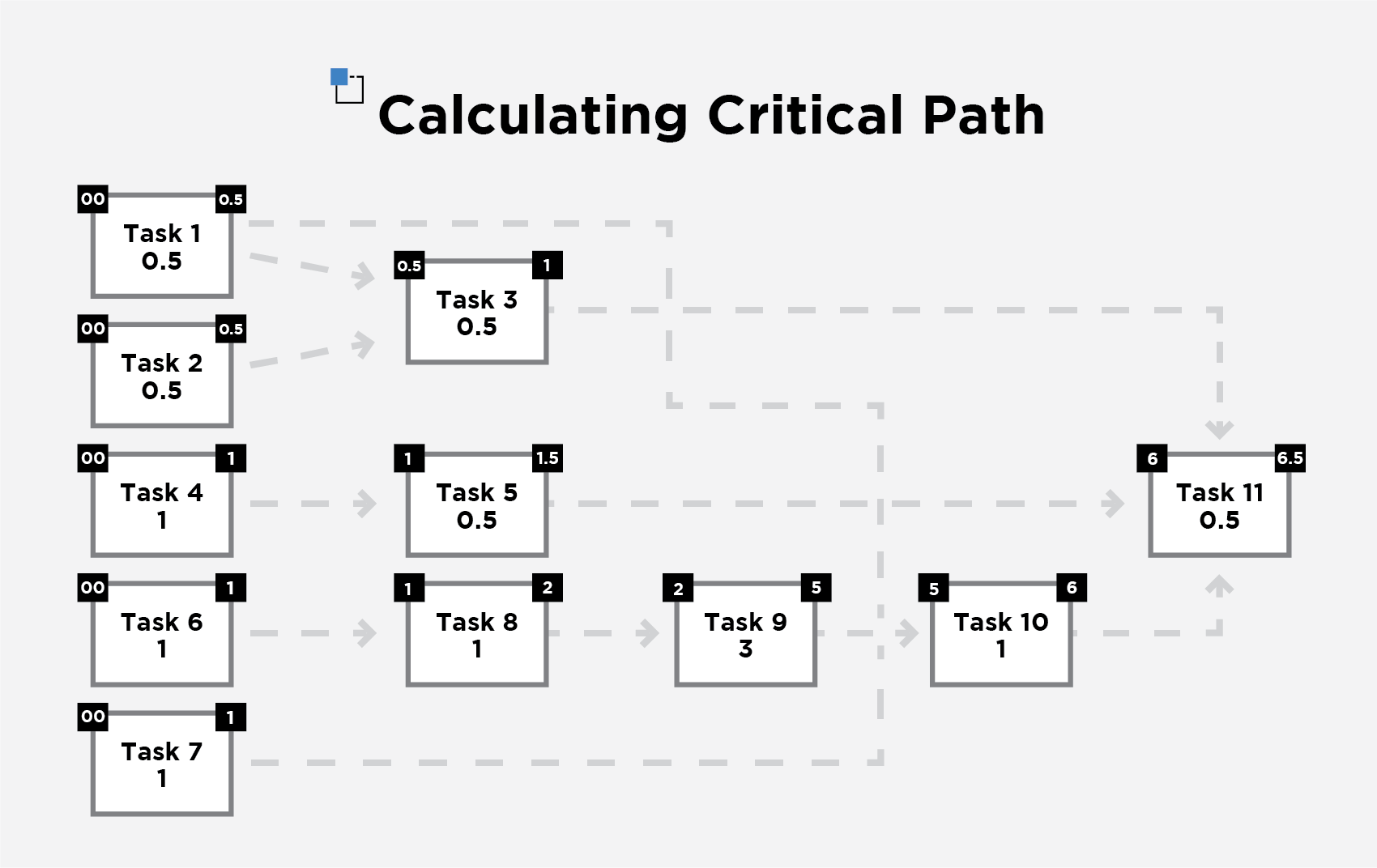 If there are conflicts where three tasks are pointing to it, as is the case with Task 11, pick the highest EF as its ES.

Step 5: Do a Backward Pass

Once you’re done with the forward pass, you may now do the backward pass; however, there are two new variables to consider:

To start computing for each task’s LS and LF, begin by copying the last task’s EF as its LF. In our case, copy Task 11’s EF (6.5) at its upper-right side, and write it on the lower-right side as well.

Find the LS by subtracting the duration from the LF. In Task 11’s case, LS is 6.

Use task 11’s LS as the LF of all the tasks pointing to it: Task 3, Task 5, and Task 10. Subtract their durations to find their LS, respectively. 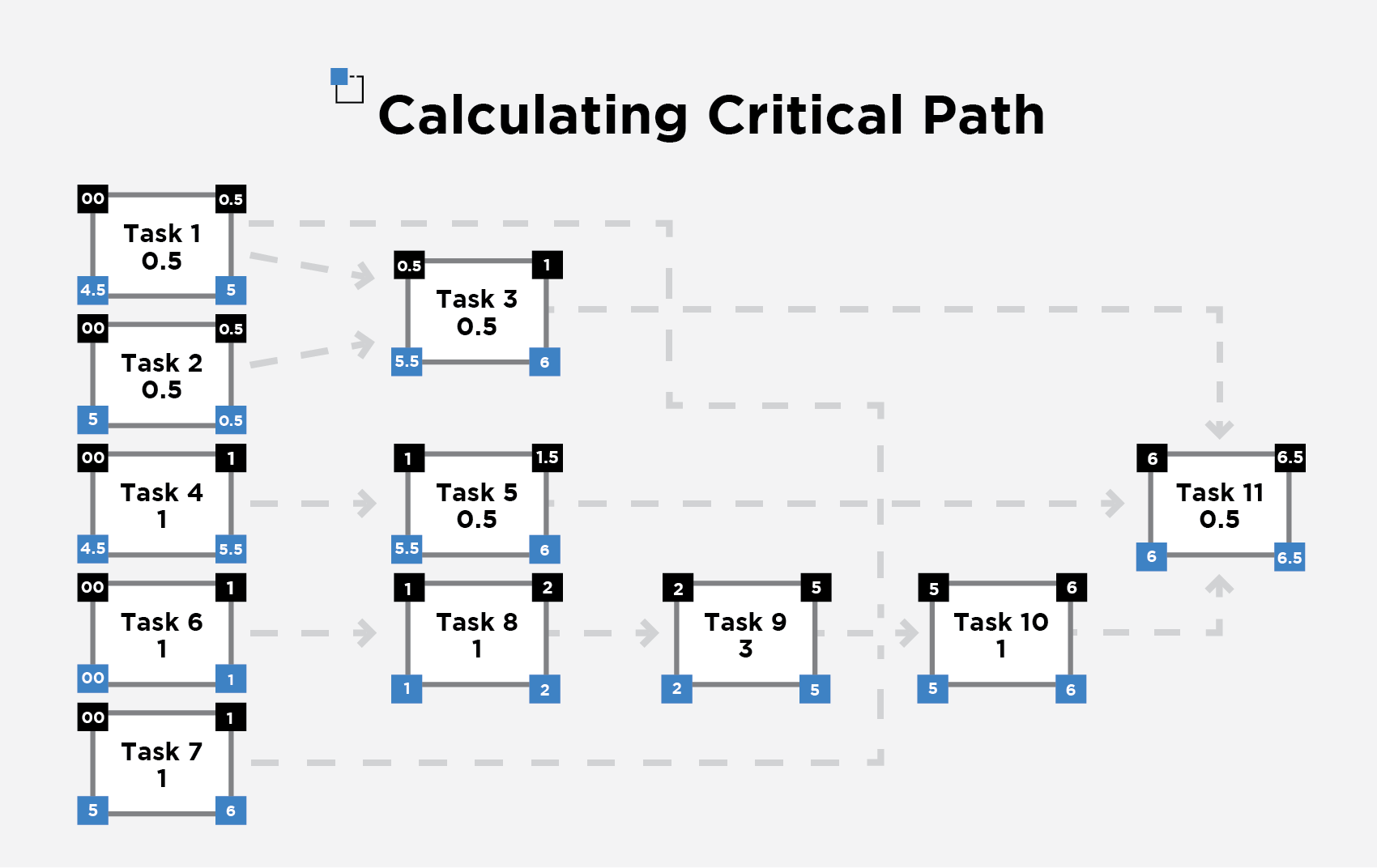 For tasks that point to more than one task, use the lower LS as its LF. 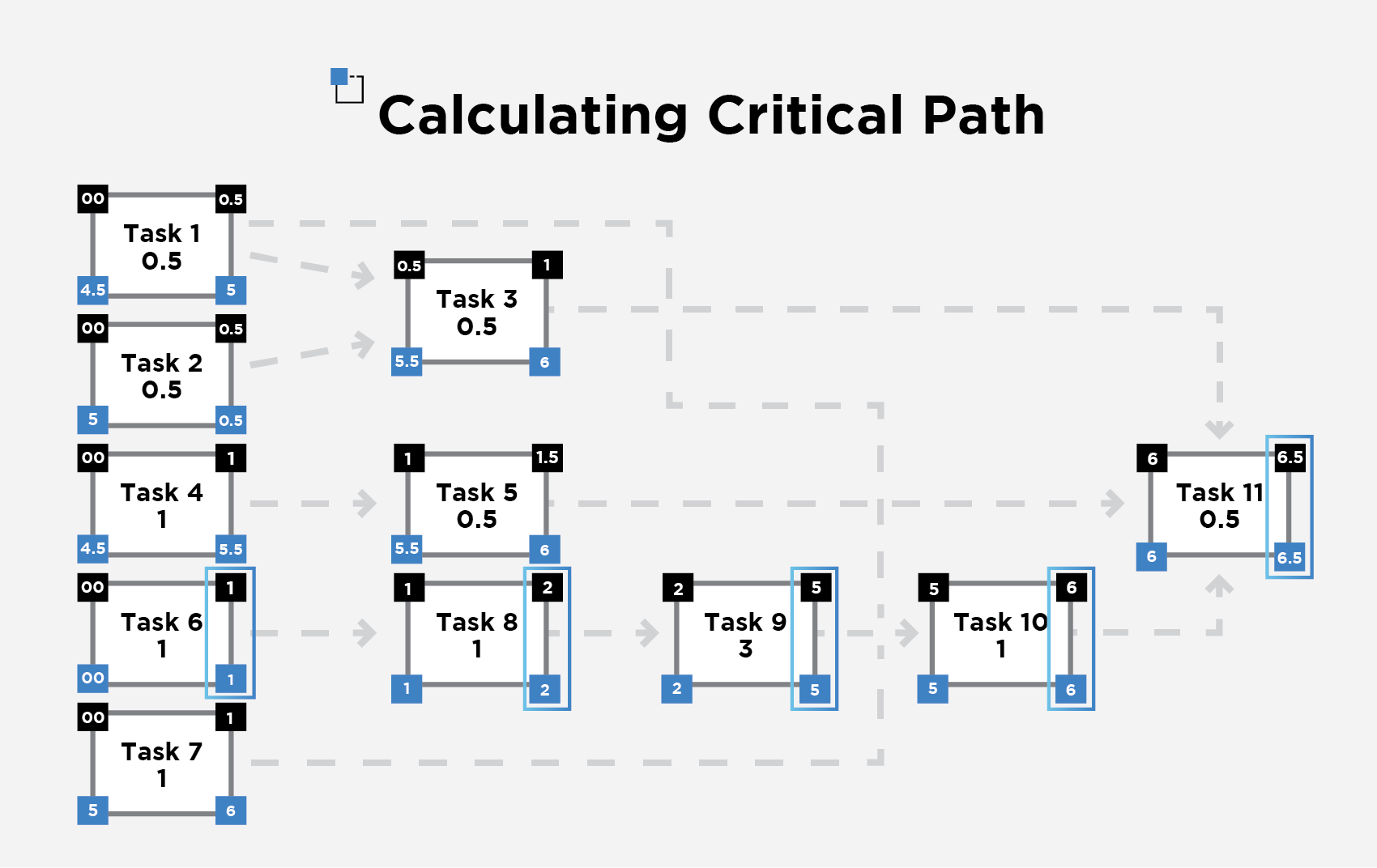 In this case, the critical path is the creation of the press release:

For non-critical activities such as Task 4 (confirming speakers and panelists), failing to finish on day 1 (EF) wouldn’t extend the duration of the project as a whole — as long as it’s finished on or before day 5.5 (LF). But for a critical activity such as Task 9, failing to finish on time will result in the press conference as a whole being delayed.

Benefits of the Critical Path Method

Limitations of the Critical Path Method

The network diagram used to identify the critical path visualizes process dependencies. What it doesn’t illustrate, however, is resource dependencies.

An example of resource dependency is if there’s only one person assigned to do two tasks. Because of this, one task can’t be started until the person finishes the other. These types of dependencies need to be considered when estimating a project’s duration, as well.

Another dependency the network diagram doesn’t illustrate is time dependencies, such as seasonal interruptions like software maintenance, office closure, holidays, and others. In short, work can’t resume until they’re finished, so these should also be considered when estimating a project’s duration.

A Great Method for Planning a Project Timeline

The critical path method is a good way to identify the minimum time you need to finish a project. It also points out your critical activities, or tasks that can’t be delayed without compromising your project’s deadline.

Find your project’s critical path automatically through project management software, like the tools listed below, or manually through a forward and backward pass.

Hannah Donato is a SaaS freelance writer for project management and productivity. Her works help SaaS brands become more relatable with actionable tips and relevant stories. Currently, she’s also an events manager and brand coordinator for a game development company in the Philippines, with four years of experience as a producer for games on multiple platforms.