What Is a Gantt Chart?

How is one to create a project plan that spans a long time period, involves several people, and potentially crosses multiple geographical areas, time zones, and possibly even incorporates multiple projects? A modern Gantt chart, also known as a modern timeline, is one of the best project management tools available to view project tasks that are scheduled over a time period, as well as providing information on overall project progress.

Named after American engineer and management consultant Henry Gantt, the traditional Gantt chart was developed in the early 1900s and was drawn by hand. Today, teams use modern Gantt charts to manage and monitor projects. Here, we’ll cover what a Gantt chart is, what its main uses are, its limitations, as well as the two main benefits to project management — along with a visual example of a Gantt chart. For all intents and purposes, when we refer to a “Gantt chart,” the “modern” is implied.

What Is a Gantt Chart?

A Gantt chart is a computer-generated visual diagram that combines nested lists, bar charts, and timelines into a visual representation of the order and timing of a project. A list of activities appears on the left of the document. An interval timeline, usually in days or weeks, appears on top and spans the rest of the document to the right of the vertical activity list. A horizontal task bar appears opposite an activity or task with its length displaying duration. 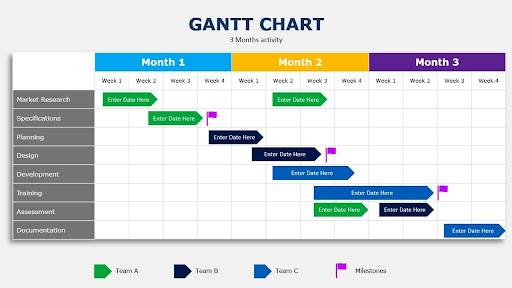 Some big names in Gantt chart software include:

What Are Gantt Charts Used for?

Below are a few of the main ways that Gantt charts are employed.

A Gantt chart displays more than just project status. Gantt charts deliver detailed project timelines according to projected tasks and their deadlines. They can also provide bird’s-eye view of information, such as summary tasks and overall project progress, or a worm’s-eye view, which looks at more specific task progress and who is responsible for it.

Gantt charts display the relationship of tasks over time and the project sequence, task dependencies, critical path, and milestones. It is a vital project plan that keeps teams organized and on the same page.

A Gantt chart can cover the entire project lifecycle, but allows you to hone in on divisions, phases, or parts of a project. With a Gantt chart, users can easily expand or collapse sections of a project or zoom in on a small project that’s part of a bigger whole, giving you insight into the work breakdown structure (WBS) of your project.

Gantt charts allow teams to easily update task status and completion. This capability makes project management easier because it automatically updates individual tasks and progress elements of the chart across user accounts/screens, thus displaying the most current task status for all involved.

Teams use Gantt charts mainly for project schedule management. They do not put all project information in a Gantt chart because it is counter-intuitive, defeating the main purpose of the chart. Some information is therefore necessarily absent from a typical Gantt chart project plan.

Other Gantt chart limitations include:

As you ramp up a project, a Gantt chart simplifies the planning process in several ways, including but not limited to:

A Gantt chart is useful for projects of all sizes, but manually tracking and updating a large, complex project is often difficult, exhausting, and inefficient. As such, computer programs do a better job creating Gantt charts. Project management software solutions now include sophisticated features, integrations, add-ons, and plugins that build dynamic and interactive Gantt charts that can make predictions and recommendations to keep projects on track.

Why Use a Gantt Chart?

While Gantt charts certainly do not replace trained and certified project managers, they do make project managers’ jobs easier, allowing them to work and generate project plans more efficiently. They are also more streamlined and easily parsable than something like a pert chart. Gantt charts facilitate project team collaboration and communication by lying out a project plan. Gantt chart software is, therefore, an especially good investment for organizations that execute complex, time-sensitive projects.

Read next: Advantages and Disadvantages of Gantt Charts

Lauren Hansen is a writer for TechnologyAdvice, covering IT strategy and trends, enterprise networking, and PM software for CIOInsight.com, enterprisenetworkingplanet.com, project-management.com, and technologyadvice.com. When she's not writing about technology trends, she's working out or spending time with family.