Gantt charts are named after Henry Gantt, an American engineer and management consultant who developed this type of bar chart in the early 1910s. A Gantt chart provides a graphic schedule of how a project is planned and controlled, and how progress towards the different stages of the project is recorded. Information is showed with a listing of elements such as milestones, activities, deliverables or work breakdown structure that have start and end dates, as well as horizontal bars that may show percent-complete shadings of the work progress. Modern Gantt charts also show dependencies, or the logical link or relationship between predecessor activities and successor activities or between an activity and a milestone.

Gantt charts are primary tools in project management, and therefore, are now used within many business functions as well as across different industries. Major construction and infrastructure projects have been started, tracked and completed with the help of Gantt charts in project plans. Today, they are also being used in software development, IT implementations, marketing campaigns, and also in scheduling processes and resources. Before, Gantt charts are 100-percent manually created documents like any other printed schedule document. When computer software and spreadsheets arrived, Gantt charts were created automatically based on input dates and other sequence information, but the elements and chart components remained static once data has been entered. Updating it requires entering new data such as dates and relationships to reflect changes or to create a new document.

Advanced software components, drag-and-drop functionality, and other modern interactive web technologies have brought about dynamic Gantt chart components. This means that even after initial data has been entered to create the Gantt chart, users can edit and revise that information by directly manipulating and updating the components of the Gantt chart itself, such as the order of the elements, the length (time and date) of the bars, or the dependency of tasks. This enhancement has made it easier and faster not only to create Gantt charts on the fly but also for multiple users to collaborate and keep it updated and relevant.

Below is a list of the top 5 dynamic Gantt chart components available to software developers:

The Ext Gantt by Bryntum is based on the Ext JS framework. Project schedules can easily be managed inside web applications. With an intuitive and interactive user interface, both mouse and keyboard can be used. It will import MS Project schedules and also export to PDF or PNG file formats. As an Ext JS component, its functionality can easily be extended for the development of custom plugins. 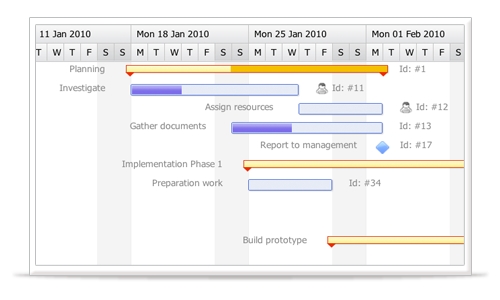 The Kendo UI Gantt Chart is a part of the Kendo UI Professional Package by Telerik for building sites and apps in HTML5 or JS. Its Gantt Chart widget is a powerful project management tool capable of visualizing tasks in treelist view, timeline view or combined view. In the treelist view, columns are editable and sortable. In the timeline view, users can choose to show the timeline in day, week or month. The tasks can be directly manipulated to change its start and end dates and its dependencies. 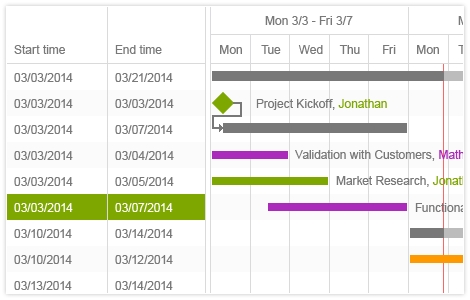 The open source JavaScript Gantt Chart from dhtmlx is a highly interactive and useful tool for web-based project planning applications. It provides basic chart functions, filtering and zooming, and can even show an hours scale view. It shows projects and tasks hierarchically on the left pane and can show different types of dependencies as lines. Tool tips can be enabled to show quick info, and the API is flexible to handle a large number of events for further customization.

GanttView for WinForms from ComponentOne is a complete project management tool that delivers an MS Project-like user experience with its support for the .Net platform. From a list of tasks, durations and constraints, it can automatically generate a schedule diagram, which can then be manually edited through tabular grids, dialog boxes, and click and drag action on bars within the chart pane. Calendars can be configured for custom weeks, time, and exceptions. Task constraints can be set and dependencies assigned. Bar styles are customizable for pattern, shape and color.

AnyGantt Gantt component is a cross-browser and cross-platform Flash-based data-visualization tool from AnyChart. It is an interactive and animated tool for building Gantt charts. Users do not need to have Flash skills or knowledge. It uses XML as its data interface. It can show diagrams for project progress or for resource utilization. It is compatible with scripting languages and can use sources such as text files, Excel, CSV formats and databases.

When Henry Gantt invented this type of chart, his goal was to know what each worker should do and did do, and what amount of work should be done and has been done. The 5 dynamic Gantt Charts listed above not only can show more information but also be used easily. Have you encountered other interesting Gantt chart components recently?