iZenBridge is a YouTube channel maintained by iZenBridge Consultancy, a privately held training and consulting company based in Gurgaon, India. It is a Registered Education Provider by the Project Management Institute and SCRUM Alliance. It was founded in 2012 by its current Director, Saket Bansal, PMP, PMI-ACP, with clients in over 50 countries. Courses offered include PMP, PMI Agile Certified Practitioner, PMI Professional in Business Analysis, SCRUM, SAFe Agilist, Kanban and other advanced agile programs.

The iZenbridge channel lists videos that introduce the courses, short training presentations, webinars, and Google Hangouts that contain e-learning materials for various PM and agile topics. Video lengths ranges from as short as a few minutes of course introductions to hour long webinars and are clear in both video and audio quality. The channel started on September 2012. Currently, it has over 7,800 subscribers and its videos have been viewed for more than 850,000 times. In most of the videos, a trainer or consultant appears in front providing explanations about the topics. Occasionally, they use learning aids such as illustrations and cards. Some videos also contain notes and other training materials discussed during the video presentations.

The most popular video tutorial on the iZenBridge YouTube channel is an introduction of the PMBOK 5. It was uploaded in August 2013 and has been viewed for more than 71,000 times. It is a 17+ minute video where Mr. Bansal discussed the first lesson of the online PMP training program. The trainer discussed the PMBOK 5 as an important reference that contained subsets of PM body of knowledge, common language, vocabulary and definitions, as well as tools, techniques and processes that are considered good practices.

The iZenBridge channel most recently uploaded a video that introduces concepts about the SAFe Agilist Certification course. It was uploaded on January 27 and has been viewed more than 50 times already. Scaled Agile Framework (SAFe) Agilist Certification training is one of the courses offered by the company. On the video that runs about 2 minutes, Mr. Bansal explains the advantages of taking the SAFe course from them, a general discussion of the course content, the added benefit of earning sufficient SCRUM educational units to be a CSP, and the many ways and means of providing learning and opportunities to the course participant.

Other Featured Videos and Playlists

Aside from individual videos, iZenBridge YouTube channel also has several playlists or video collections that are related to one topic and can be played one after another. The largest playlist containing a total of 25 videos is about CSP, SCRUM and agile. It mostly contained webinars that may range from half to one hour videos. A few short videos about the course are also included. 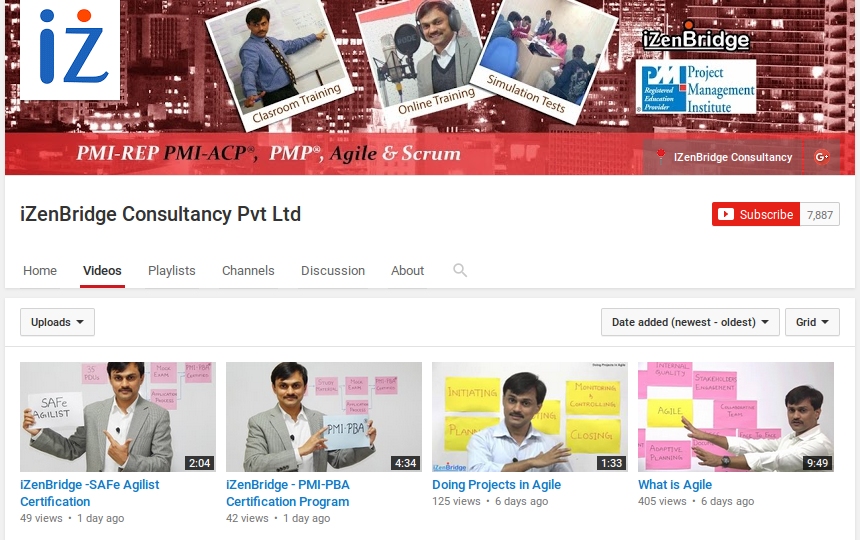 The most recently updated is about the Scaled Agile Framework, containing 6 videos. Other playlist topics are about PMI-ACP, webinars of about 14 videos, a collection of 8 Google Hangout episodes, and PMP. Webinar videos display mostly slides that contain principles, notes, and illustrations about the topic with voice-over discussion. The audio quality is still good. Google Hangout videos, on the other hand, display mostly the head shots of the participants in a video conference. Video and audio quality are very good.