The International Institute for Learning YouTube channel includes a variety of videos, such as project management tips, business sustainability, and interviews with authors and other personalities. The YouTube channel is part of a bigger knowledgebase, their website www.iil.com, which was founded by E. LaVerne Johnson. The channel has more than 110 videos, most of them based on important concepts in project management. The IIL YouTube channel was set up in November 2009, and has garnered more than 120,000 views since.

The most popular video on IIL’s YouTube channel is titled ‚ÄòIntroduction to PM: What’s So Great About Project Management’. The video was uploaded in April 2013 and it has received more than 15,000 views to date. It is also the longest video on their channel, with a runtime of almost 30 minutes. The video is presented by Greg Balestrero, who is a well-known personality in the world of project management, as he is the former president and CEO of Project Management Institute, and currently, the Strategic Advisor to IIL.

The video, as obviously understandable by its title, gives a thorough overview of the key concepts in project management. The video begins with the introduction of the host Greg Balestrero, followed by answers to basic questions such as ‚ÄòWhat is a project?’ and ‚ÄòWhat is the discipline of Project Management?’. Then, he explains the success factors involved in project management, along with lifecycle of a project. In the end, he describes some of the problems that might be faced, and constraints that should be kept in mind, during project management.

The most recently uploaded video on IIL’s YouTube channel explains why companies should become more sustainable. It is a very short video of 1:17 minutes, and it was uploaded on 7 January, 2014. It has been viewed 154 times as of yet. The video is presented by Greg Balestrero, who puts forward the benefits for companies if they become more sustainable. He explains that a company becomes instantly much more attractive if they care about their employees, the society, and the environment, rather than focusing on profits only.

Apart from the tutorial videos, the International Institute for Learning YouTube channel also has videos with interviews and conversations with well-known people from the world of project management. One particularly popular playlist is ‚ÄòCoffee Break Project Management’. The playlist contains three videos of approximately 6 minutes, and presented by Frank Saladis, who is an IIL author and trainer. The basic purpose of the playlist is to help project managers gain knowledge of some relatively new concepts, along with providing them with tips regarding project management. 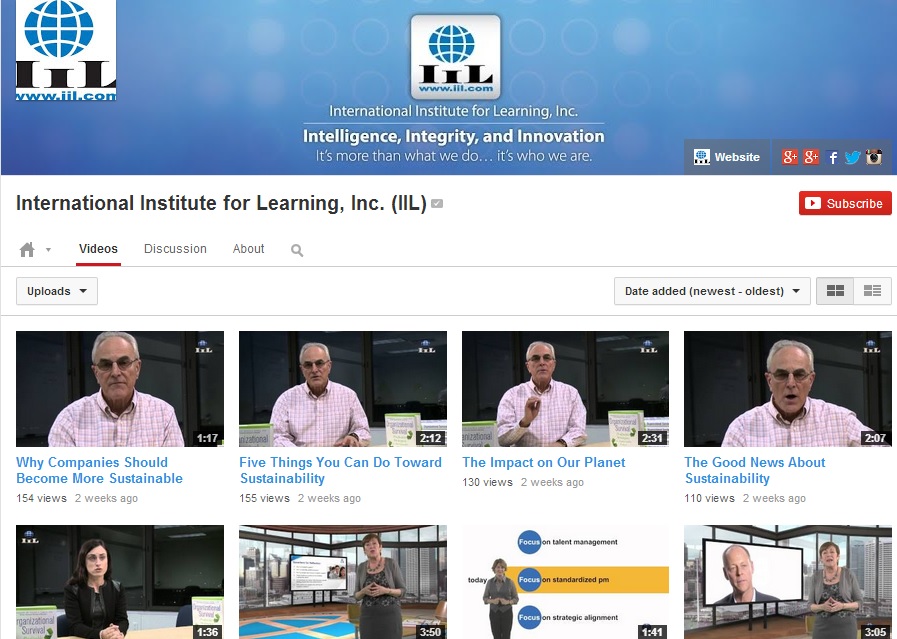