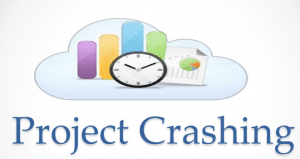 Nearly every experienced project manager has been through it. You inherit a project with a difficult or near-impossible schedule and the order comes down to deliver on time. When you mention how far the project is behind, you’re simply told to “crash the schedule “, or “make it happen. ”

As a long time project manager who now advises others on how best to manage projects and project portfolios, the term “schedule crashing ” still makes me bristle. I picture a train wreck, not a well-designed product or service that’s delivered on time, and for good reason. While schedule crashing sounds so easy in theory, in practice schedule crashing is a very risky undertaking that requires some serious evaluation to determine whether crashing will actually help or hurt.

As defined by BusinessDictionary.com, schedule crashing is “Reducing the completion time of a project by sharply increasing manpower and/or other expenses, ” while the Quality Council of Indiana‚Äòs Certified Six Sigma Black Belt Primer defines it as “‚Ä¶to apply more resources to complete an activity in a shorter time. ” (p.V-46). The Project Management Body of Knowledge (PMBOK), fourth edition describes schedule crashing as a type of schedule compression, including overtime and paying for expedited delivery of goods or services as schedule crashing techniques (PMBOK, p. 156), though I generally think of overtime as another type of schedule compression ‚Äì not crashing.

From a scheduling perspective, schedule crashing assumes that a straight mathematical formula exists between the number of laborers, the number of hours required to complete the task, and the calendar time required to complete the task. Said simply, if a 40-hour task takes one person five days to complete (40 hours/one person * 8 hours/day=5 days), then according to schedule crashing, assigning five resources would take one day (40 hours/5 people*8 hours/day=1day).

The Risks of Crashing

Frederick Brooks had much to say about the problems with schedule crashing in, “The Mythical Man-Month”. In this ground-breaking work about software engineering, Brooks explains that there are many factors that might make schedule crashing impractical, including the dependency of many work activities on their preceding activities and the increased cost of communication. This phenomena is now referred to as Brook’s Law‚Äìadding resources to a late project actually slows the project down. I personally saw Brook’s Law in action on a large program led by a prestigious consulting firm where the client requested that extra resources be added in the final two months of the program; because the current resources were forced to train new staff instead of complete work, the program delivered in four more months instead of two.

Additional risks of crashing include increased project cost if they crashing attempt fails, delayed delivery if the crash adversely impacts team performance, additional conflict as new team members are folded into the current team to share responsibility, risks to product quality from uneven or poorly coordinated work, and safety risks from the addition of inexperienced resources.

In short, schedule crashing at its most extreme can be fraught with risks. Managers at all levels should be very cautious before recommending or pursuing a crashing strategy.

Making the Call to Crash

So, how can a project manager decide if crashing will help? Here are seven questions I ask myself when deciding if crashing is likely to succeed:

If you’ve answered these questions and responded “yes ” to at least five of the seven questions, then you have a reasonably good project-crashing opportunity; a “yes ” to three or four is of marginal benefit, while a “yes ” to only one or two is almost certain to end for the worse.

Alternatives to the Crash

Fortunately, there are alternatives to schedule crashing that may be more appropriate than the crash itself.

A Final Caution About Crashing

Because it’s rarely well understand by anyone other than project managers, schedule crashing is often recommended by co-workers who really don’t understand the implications of the decision. While they see an opportunity to buy time, they almost never see the inherent risks.

As a result, it’s critical that project managers not only assess the likelihood of success when considering crashing as an option, they also educate their stakeholders, their sponsor and other decision-makers about the risks of a schedule-crashing approach. Doing anything less perpetuates the myth that crashing is a panacea that cures all that ails a late project, potentially creating much bigger problems for everyone down the road.