The Chris Croft YouTube Channel is registered to Chris Croft Training, a UK company that provides training courses on project management, time management and other business and self improvement skills. Aside from being the owner of Chris Croft Training, Chris is also a managing partner of the Croft Management Centre, a training company that provides accredited diploma courses and certifications in various management subjects. His YouTube channel began in December 2007, has been subscribed by over 1000 people and has been viewed more than 281,400 times.

The Chris Croft Channel has about 81 videos. Most are training videos discussing different subjects such as time management, project management, Gantt charts, and how-to videos. There are also some music videos as Chris is also a musician. The most popular videos however are his management training videos which can be a short one-minute tip or a 25-minute demo of how to make a Gantt chart in MS Excel. There are also multi-part videos like the 3-part time management tutorial and other soft skills training videos such as about managing people or learning presentation skills.

The most popular project management video is titled Project Management in 8 minutes. It was uploaded in May 2010 and has been viewed 38,800 times. However, on this same page, Chris announced a new and improved version of the video titled Project Management in Under 8 minutes. This more recent video of about 7:44 minutes was uploaded in February 2013 and already has a total of 34,300 views.

The video showed a slide presentation of the 12-step process followed by the Association of Project Managers with a clear voiceover of Chris Croft discussing each step. Included in these steps are defining the project, listing the tasks, estimating the cost and time of each task, and so on. In detail, he discussed the importance of each step such as the first step. It is important to define the project carefully, agree on the definition with everybody, probably in a kick-off meeting, and have this agreement in writing, which is called the Project Initiation Document. The document specifies what is going to be delivered, when, and at what cost. It is also important to know the key driver (quality, time, or cost).

The most recently uploaded video about project management on the Chris Croft Channel is titled Critical Path Analysis Made Simple. It is a 3:23 minute video uploaded in August 2013. Like most other tutorial videos on this channel, it is a slide presentation with a voiceover of Chris teaching the viewer how to easily find the critical path for a project.

He discussed the importance of finding the critical path which is the longest route in the network diagram. This longest route is actually the shortest time that a project can be completed. He then showed a simple and practical way of doing it with the use of post-it notes on a whiteboard. By listing the tasks and its duration on the notes, arranging them on the whiteboard, and drawing arrows as to the sequence and dependencies of the tasks, a simple analysis can result in finding the critical path easily. 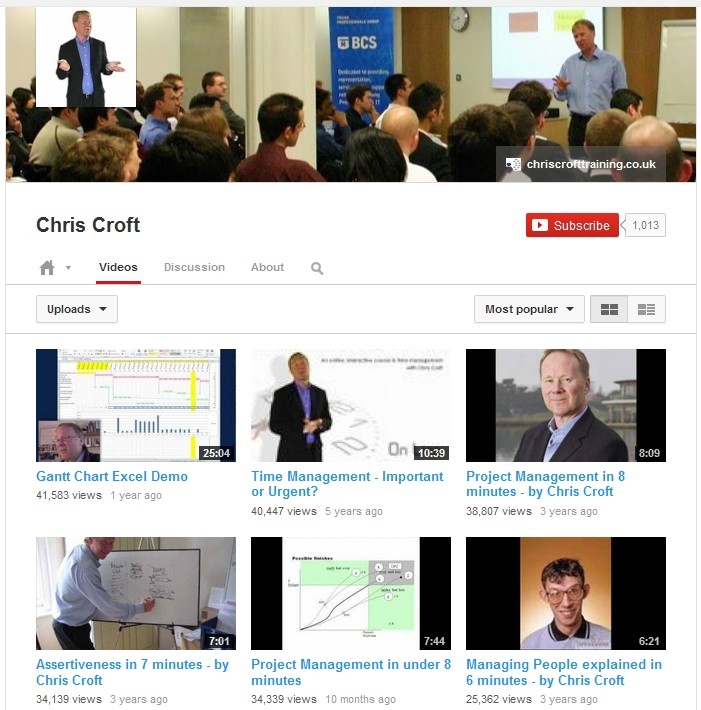