The Association for Project Management YouTube channel is the video channel maintained by the APM, a registered charity organization representing the largest professional body for project management in Europe. The Association commits to continued development and promotion of project and programme management for its tens of thousands of individual members and hundreds of corporate members through its 5 Dimensions of Professionalism. The APM channel, which provides Association news, event videos, webinars, and promotions, started in May 2010. Presently, it has over 400 subscribers and more than 52,900 views.

The APM channel has a collection of 107 various videos for its members and guest viewers. It has a mix of informational presentations, video interviews about famous projects and project professionals, and promotional clips about the benefits of membership and career qualifications. Most videos are of short duration, between 2 to 5 minutes, usually less than 10 minutes. A few videos reach almost an hour or so, like the one about the APM Body of Knowledge 6th Edition. The channel is well maintained, as date of videos range from three years ago as the oldest to one that was uploaded just five days ago as the newest.

The most popular video in the APM channel is an animated presentation depicting and celebrating the 40-year history of project management. Titled History of Project Management, the 3:22 minute presentation showed the most significant projects and how they came to be with the help of PM. However, the second most popular video gives a more practical and updated lesson to project managers. It is an interview segment called Project Focus by Project Magazine where project director Robert Deatker shared some insights about the megaproject The Shard, currently Western Europe’s tallest habitable building. The video is 5:15 minutes, uploaded on February 2012 and has been viewed over 4400 times.

The video talked about translating the project vision of building The Shard, a world-class building in an area in London. They also discussed the main challenges that came in different shapes and sizes, including design challenges and working space challenges. Robert Deatker also mentioned how good PM helped in understanding the details and communicating them clearly to all the various parties involved.

The webinar titled How to create an active and vibrant community of practice is the most recently uploaded educational video on the APM channel. It was published in January 16, 2014. It is about an hour long webinar presented by the APM’s Knowledge Specific Interest Group (SIG) chairman Judy Payne and the webinar’s speaker Michael Norton of Knowledge Hub. At the beginning of the webinar, there was a quick poll asking the participants if they use communities of practice at work. The result of the poll showed that about 25% of the participants have active communities of practice but a larger group, 34%, was not sure what a community of practice is.

The webinar then proceeded to discuss what an online community is, what the benefits are, and what the different types are. The speaker also discussed managing expectations, identified the key ingredients, and shared facilitation tactics. For example, the webinar mentioned the definition used by Etienne Wenger for community of practice. However, it was stated that there is really no single accepted definition but all have similar characteristics such as putting one in touch with like-minded colleagues and peers, allowing one to share experiences and learn from others. The slides are clear and the audio quality is understandable but sometimes tinny.

The APM channel has several playlists, and the one with the greatest collection of videos is about a collection of APM conference videos. The 2013 APM Conference titled Adapt! called on the profession to adapt its thinking to growing expectations of a society that expects all projects to succeed. The playlist also has past APM conference videos as well as testimonials of the importance of having APM qualifications. 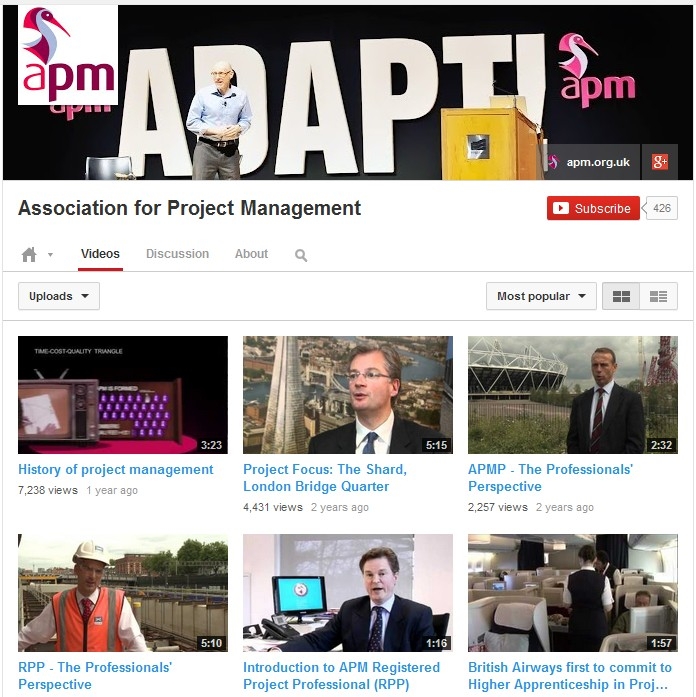