The Ahmed Ali YouTube Channel is registered to the website tutorali.com. Tutor Ali or Ahmed Ali is a Bachelors in Architecture graduate from Mumbai University and a PMP. He moved to the US and has been teaching in private, post-secondary schools and colleges for 12 years. Since 2009, he has been a Professional Adjunct Instructor at the ITT Technical Institute and also the founder of Tapin-IT, LLC, a registered distant learning company that produces PMP-CAPM videos and AutoCAD training videos. The Ahmed Ali channel has a total of 60 videos, a quarter of which are PMP related and the rest are about AutoCAD training materials. The channel began in February 2013, has been subscribed by about 3700 and has garnered more than 384,600 views.

The videos in the Ahmed Ali channel are grouped into two playlists: PMP videos and AutoCAD tutorials. The 14 publicly viewable project management videos are particularly about PMP training and the latest PMBOK. The PMP video playlist has been viewed over 13,600 times. These videos include introduction to the PMBOK 5, tips for passing the PMP exam, and tutorials about PM knowledge areas. Most project management videos are between 30 minutes to 1 hour.

The most popular PM video is also the longest at 1 hour 25 minutes. It is a tutorial about the updated 47 processes of project management as per the 5th edition of the PMBOK. It was uploaded in January 2013 and has been viewed more than 48,200 times. The video showed a color-coded grid comparing PMBOK 4 and 5, with a voiceover of Ahmed Ali explaining the addition of 5 new processes included in PMBOK 5. He then proceeded to discuss about the processes, and which of the 5 process groups and 10 knowledge areas they belong. For example, he showed that in the Initiating Process Group, two processes are included, while 6 processes are included in the Project Integration Management area.

The most recently uploaded PM video is titled PMBOK 5th edition – Tips for passing your PMP exam in your first attempt. It was uploaded in February 2013 and has been viewed over 17,200 times. It is 51:30 minutes long and shows a slide presentation with a voiceover from Ahmed Ali. The learning goals in this tutorial included knowing the reason for taking the PMP exam, how to qualify and apply for the exam, knowing what materials to use, a description of what the exam is like, and tips for a study plan. For instance, Ahmed Ali explained that taking and passing the PMP exam has several incentives, such as taking a challenge to get to the next level, standing out from other project managers without PMP credentials, and having the potential for a higher salary.

As mentioned, the Ahmed Ali channel has a playlist of several PMP videos that can be watched one after another. From these, the second most popular PM video is about the topic of introduction to project management and PM framework. The video is 1 hour and 6 minutes long, uploaded in January 2013. It has been watched more than 38,700 times. It is also a slide presentation with a voiceover from Ahmed Ali discussing many aspects such as the definition of a project, project management, portfolio management, and program management. The video also discussed the relationships among these, what business value is, and the role, responsibilities, competencies, and interpersonal skills of a project manager, and other topics. 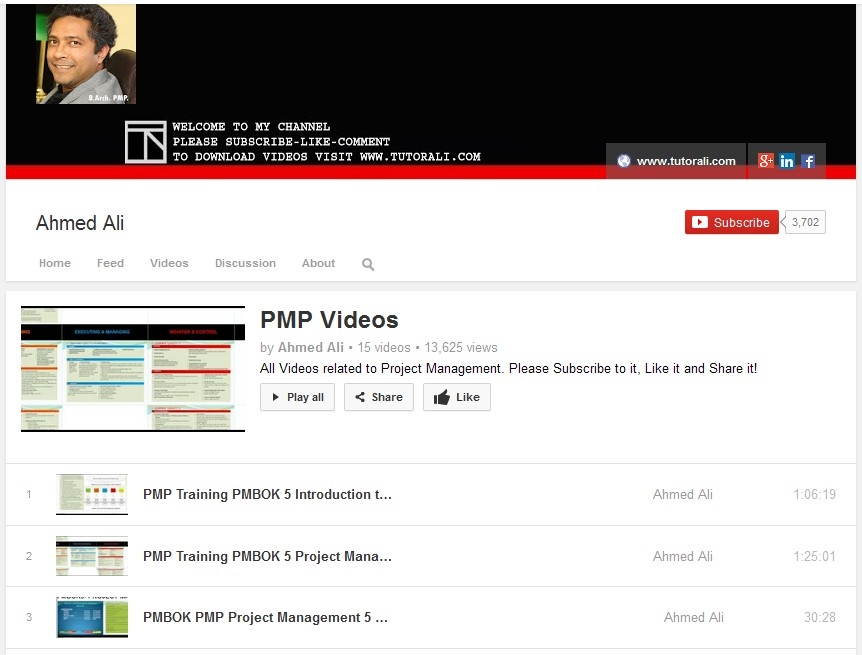