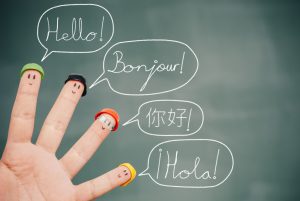 Managing a big project is a fascinating and complex task. That’s why professional project management software and qualifications are such a huge industry. It’s also why people dedicate their entire careers to running projects according to particular project management disciplines.

The advent of the internet has changed the landscape of project management significantly. Tools now exist that facilitate the coordination of diverse teams and tasks like never before. At the same time, globalization and our increasingly connected world is also leading to the creation of ever larger and more challenging projects.

Some of the most complex projects are those that involve managing teams in more than one country ‚Äì or in the same country but where the team members speak different languages. The linguistic element alone can be tricky to handle, but a multilingual project also presents unique cultural challenges. As such, it’s not just a question of engaging translators and interpreters to assist in managing the project team. Delivering a truly successful multilingual project goes much deeper than that.

Cultural considerations are key when it comes to the success of a multi-language project. So much can be lost in translation when cultural perspectives aren’t taken into account. People in different countries perceive information differently, approach tasks differently and have different attitudes to deadlines. Only a project manager who understands this in detail will be able to manage a cross-border project truly effectively.

Let’s look at timekeeping as an example. Punctuality and the importance of deadlines are core components of project management, yet approaches to these vary widely from country to country. In Switzerland, for example, it is courteous to arrive for a meeting some 15-20 minutes early. In Italy, arriving late is in no way seen as rude. A project manager organizing a video call needs to be aware of all of these cultural nuances in order to simply gather his/her team together at the right time, let alone ensure that key deadlines and milestones are met without any slippage occurring in respect of the overall project timeline.

The meaning of language is also an issue. The same word can mean different things to different nationalities. In England, saying ‚Äòyes’ to something usually means that the person in question has agreed to take on the task being discussed. In Portugal, however, saying ‚Äòyes’ could just imply that the individual has heard and understood that the task needs to be completed ‚Äì but not that they are personally committing to doing it. Without an understanding of myriad points of culture, managers of multilingual projects can quickly find themselves mired in confusion and delays.

This is where localization services come in. While translation converts text from one language to another, localization goes a step further and looks at the translated text from the cultural context of the audience it’s intended for. Localization can help project managers to understand how the information they are delivering will be perceived from a differing cultural perspective. Often, reshaping the way that the information is delivered can enhance how effective it is.

Localization is also a useful resource when it comes to quickly resolving and problems that arise. Different cultures address problems in different ways. Project workers in the US, for example, are usually happy to offer constructive criticism on the way that individuals are performing in terms of their contribution in the project. However, workers in some Asian countries would not put their colleagues in the perceived position of ‚Äòlosing face’ in this way. Thus the project manager’s attention might be drawn to focus on the US-based elements, while all the time it was the team in China who most needed support.

This is what makes localization such a powerful tool when it comes to working with a project team of diverse nationalities. It allows the project manager to ensure that the entire team understands not just the required project outcomes, but how they are going to be achieved, why they are important and the role that each individual will play in achieving them. In this way, localization can maximize the chances of the project’s success ‚Äì which is something that every project manager will be keen to do!

Louise Taylor is the content manager for translation agency Tomedes. She writes on anything and everything related to the translation industry, from the importance of human translation to the latest industry trends. She's also in charge of the Tomedes translation blog and the Business translation center.