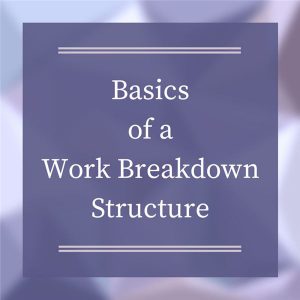 Even though the term “Work Breakdown Structure “ has been used as a label for all project scope hierarchical diagrams, there are, in practice, many types other than “deliverable ” oriented structures.

Verb-oriented WBS: a task-oriented WBS defines the deliverable of project work in terms of the actions that must be done to produce the deliverable. The first word in a given WBS element usually is a verb, such as, design, develop, optimize, transfer, test, etc.

Noun-oriented WBS: a deliverable-oriented WBS defines project work in terms of the components (physical or functional) that make up the deliverable. In this case, the first word in a given WBS element is a noun, such as, Module A, Subsystem A, Automobile Engine, Antenna, etc. Since the nouns are usually parts of a product, this WBS type is sometimes called a “Product Breakdown Structure (PBS). Deliverable-oriented WBS structures are the preferred type according to PMI’s definition.

Time-phased WBS: a “time-phased ” WBS is one that is used on very long projects. It breaks the project into major phases instead of tasks. In this type, a “rolling wave ” approach is adopted and only the near-term phase is planned in detail.

Other WBS types may include organization-types, geographical-types, cost breakdown types, and profit-center types.

The 100% Rule. One of the most important WBS design principles is called the 100% Rule, defined as follows:

“The 100% Rule…states that the WBS includes 100% of the work defined by the project scope and captures all deliverables ‚Äì internal, external, interim ‚Äì in terms of the work to be completed, including project management. The 100% rule is one of the most important principles guiding the development, decomposition and evaluation of the WBS. The rule applies at all levels within the hierarchy: the sum of the work at the “child ” level must equal 100% of the work represented by the “parent ” and the WBS should not include any work that falls outside the actual scope of the project, that is, it cannot include more than 100% of the work‚Ä¶ It is important to remember that the 100% rule also applies to the activity level. The work represented by the activities in each work package must add up to 100% of the work necessary to complete the work package. “1

If the WBS designer attempts to capture any action-oriented details in the WBS, he/she will likely include either too many actions or too few actions. Too many actions will exceed 100% of the parent’s scope and too few will fall short of 100% of the parent’s scope. The best way to adhere to the 100% Rule is to define WBS elements in terms of outcomes or results. This also ensures that the WBS is not overly prescriptive of methods, allowing for greater ingenuity and creative thinking on the part of the project participants. For new product development projects, the most common technique to assure an outcome-oriented WBS is to use a product breakdown structure (PBS).

Feature-driven software projects may use a similar technique which is to employ a feature breakdown structure. When a project provides professional services, a common technique is to capture all planned deliverables to create a deliverable-oriented WBS. Work breakdown structures that subdivide work by project phases (e.g. Preliminary Design Phase, Critical Design Phase) must ensure that phases are clearly separated by a deliverable (e.g. an approved Preliminary Design Review document, or an approved Critical Design Review document).

Of all the levels on a WBS, Level-2 is often the most important because it determines how actual costs and schedule data are grouped for future project cost and schedule estimating. A project manager may find it useful to know how much it took to design (major work element) a product after it had been completed so that the data can be used for future analogous estimating. In other cases, the project manager may want to know how much a major part of the product actually cost after the project was completed. For this a PBS would be used. Level-2 is therefore used to capture “actuals ” from a project for future estimating purposes.

When completed, each WBS element should contain the following four items:

By using a WBS in this manner the project manager can approach a complex project and decompose it into manageable, assignable portions. There is minimal confusion among project members when this technique is used.

In addition to the 100% Rule, it is important that there is no overlap in scope definition between two elements of a WBS. This ambiguity could result in duplicated work or miscommunications about responsibility and authority. Likewise, such overlap is likely to cause confusion regarding project cost accounting. If the WBS element names are ambiguous, a WBS dictionary can help clarify the distinctions between WBS elements.

M.S. in systems management and B.S. in electrical engineering, Michael has more than 30 years of project, outsourcing, and engineering experience. He is principal of Systems Management Services, and has conducted project management training at the University of California in their PPM Certificate program.