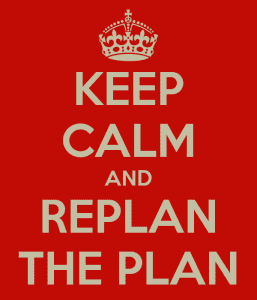 Plan to Replan: A Project is What Happens to You When You’re Busy Making Other Plans

Planning is typically done at the beginning of each project and its goal is to create the best plan possible using all the information available at the time. It is essential during this period to get inputs from subject matter experts, team members and from others who have been involved in similar projects.

During this phase, the team must first decide and agree on the intent of the project, what needs to be achieved, the deliverables and the scope of the project. Often times, one large goal is broken up into small manageable pieces, and it’s up to the planning team to decide and estimate how much resource and money is needed and how long it will take to deliver this project. This is also the time when the team determines whether the organization has what it takes in term of time and resources to deliver on the project goals.

Unfortunately, what often happens once a project plan is baselined is that any change to the plan is viewed negatively. Change is viewed as a compromise and is seen either as a failure in planning or a failure in performance. Requirement changes are ‚Äòcustomers being fickle and not knowing what they want’ while schedule changes are the result of ‚Äòineffective project management’ or an ‚Äòunderperforming team’.

The truth is, unless one is an all knowing omniscient entity, there is only so much you can know and foresee during the initial stages of a project. So much of life is uncertain, e.g. weather, changes in regulation, changes in management priorities and etc. Only when a project progresses and as events unfold, and as more information and facts become available can we begin to adjust our plans accordingly. A project doesn’t exist in a vacuum, as the landscape changes, it too must adapt or risk failing or falling short.

Since change is inevitable, there is only one solution: We should plan to replan. We should expect that our estimates and forecast are not going to be 100% correct and put in place the processes to propagate changes to our project plans as efficiently as possible with minimal disruption. We should put in place a change control management system that is designed to react to the changing circumstances in which the project operates and at the same time does not compromise the integrity and the original intent of the project being executed.

A project plan needs to be changed or updated. 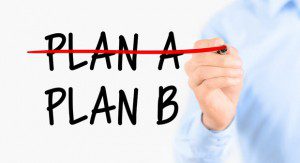 There are two major reasons a project plan needs to be changed or updated. The first is that the team is not performing and the second is the team is unable to keep up with the current plan because it was unrealistic to begin with due to the optimistic forecasting and estimation resulting from incomplete information. It seems like the tendency is always to assume the team can’t keep up, but isn’t it more likely that the plan was not perfect?

As mentioned, a schedule slip may be due performance issue or an error in forecasting or estimating during planning. If it is a performance issue, it’s because the team can no longer keep up with the schedule and meet the deadlines as planned, due to of lack of effort, ability or expertise. If it is an error in forecasting and estimating, it’s because the team has misjudged the effort it will take to deliver the project during planning and it’s now becoming apparent that it is not possible to complete the project in the time that was allocated. In both cases, the schedule should be changed and updated so that it can still be useful as a planning tool.

Although certain portions of the schedule are critical and major milestones need to be achieved at a certain date, the rest of the schedule should not be set in stone. Things go wrong, team members fall sick, vendors deliver late, unions go on strike – the schedule needs to change accordingly to still be relevant to the team.

With the exception of actual project management shortcomings and obvious team performance issues, the request for additional budget or resources is more likely to reflect the true cost of delivering the project. The planned estimates were probably off or perhaps an unforeseen event has resulted in an increase in cost.

If the additional request for budget or resources is valid and substantial, this may be the point where the project owners may want to consider scoping down on some of the project deliverables. Or they may decide to cut their losses and terminate the project altogether. Which can be a good idea, so long as they don’t fall prey to the Sunk Cost Fallacy, where a person or an organization continue on with a project having already invested a lot of effort in it, even though it may otherwise not be the most rational thing to do.

Once the management has decided on a change and it has been approved and implemented into the existing project plans, it is important that the team be informed immediately so that everyone is clear on the latest schedule, goals and deliverables. A communication plan must be in place to cascade the information not just to the management, but to everyone on the team so that everyone is on the same page, working on the same plan to deliver the same goal.

In summary, always plan to replan. Since change is inevitable, rather than resist and dreading change, a good project manager should plan and be prepared for the inevitable. Hard and inflexible plans tend to crack and break in the real world. Without compromising the original intent of the project, strive to create a plan that is flexible yet still able to deliver on all of the project’s deliverables ‚Äì as per plan.

Azhar Ashari
Azhar Ashari is a certified project management practitioner and has been managing projects for close to 8 years. He is currently a Project Manager in Malaysia’s national R&D centre, MIMOS Berhad.