What Is a Pareto Chart?

A Pareto chart is a bar chart named after Italian economist Vilfredo Pareto. It’s used for analyzing problems or causes by time, cost, or frequency of occurrence. It also helps determine the most significant or pressing issues.

The Pareto principle, or the 80-20 rule, “is a phenomenon that states that roughly 80% of outcomes come from 20% of causes,” according to Asana. A Pareto chart depicts a relationship between two numbers, where a relative change in one quantity results in a proportional relative change in the other quantity. These quantities, their changes, and their relationship to other quantities are shown in a Pareto diagram like the one below. For example, when assessing a product’s quality, the Pareto chart above depicts

With this information, production and quality managers can determine which failure(s) to address first — namely, those that are occurring the most frequently.

How to Read a Pareto Chart 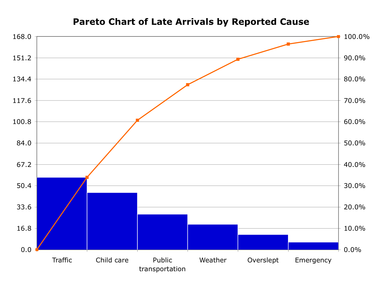 The length of the bars are shown in units at the left vertical axis, and they typically represent frequency of occurrence, but can also be another unit of measure.

Notice how the bars are arranged. The longest bar appears on the left along the horizontal axis, and each bar gets progressively shorter. When arranged this way, the raw data and its meaning become more apparent. Here, we can see what the most common cause of tardiness is all the way down to the least common cause.

The Pareto principle (or 80-20 rule) is a generalization and does not distribute at an exact 80:20 ratio. However, it provides an accurate direction or trend that can be quickly shown in a Pareto chart.

Pareto charts and the principle behind them are useful for a variety of applications:

The chart can be helpful when you want to assess a problem with a broad range of causes, so you can identify specific factors. As visual tools, Pareto charts are a great way to effectively communicate data and ideas to stakeholders.

How to Build a Pareto Chart

A Pareto chart is a useful tool for identifying the most significant challenges or causes an organization faces. As a visual tool, it helps effectively and convincingly communicate data to others.

If you’re interested in learning more about top-rated project management software, the editors at project-management.com actively recommend the following:

Lauren Hansen is a writer for TechnologyAdvice, covering IT strategy and trends, enterprise networking, and PM software for CIOInsight.com, enterprisenetworkingplanet.com, project-management.com, and technologyadvice.com. When she's not writing about technology trends, she's working out or spending time with family.