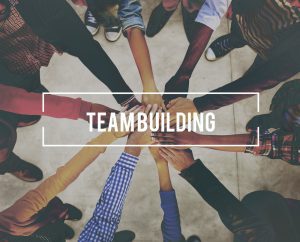 1 – Go Out For A Drink Together In A Big Group

It may sound rather tame, but so many people forget that humans are social creatures and don’t need team building exercises where they run around in paddling pools with their pants rolled up. Suggesting something as simple as taking your team out for a drink may cause your bosses to look at you sideways, but the simplest solutions are often the best ones.

Make a special effort to make sure everybody is in on the conversations, such as by personally bringing them into the conversations and making sure the tables and chairs are arranged so that everybody can hear each other and everybody feels part of the group. Do not make the mistake of having a meal because is causes people to have to spread out to the point where some people cannot hear others without raising their voice(s).

The rules are simple. Each person takes it in turn to say something they have never done, and if another person has done it, then they have to raise their hand. Each person gets a turn, and each learns a little something about the other people in the group.

3 – Try Role Swapping For A Day

One way to team-build is to allow people to swap jobs for a day. In many cases, such an event is not possible, but if your employees are working in the same team, then swaps may be possible. It gives your employees something in common and something to talk about.

4 – Play Games To Test Who Is The Best Liar

Each person has to tell one truthful statement and one lie, and the participants have to guess which the lie is. It is fun, and each person learns a little something about the other. One way to bring a team together is to bring them all together in order to solve a genuine problem. There are no bad ideas, and there are plenty of ways that different types of employee may add to the group. If Marvel can make the Avengers work together on a big problem, then surly you can get your staff members to work together.

It used to be called “Kiss, Marry or Kill,” but if you play that, then you are guaranteed to have at least one employee play the PC principle card and you will have to explain to your superiors why you were silly enough to play a game with a name that has “kill” in it despite the fact the game has been played for the last 100 years without incident.

Pick interesting and funny celebrities and play it casually so people can crack jokes and express themselves with comments such as, “Ugh, I would rather kiss a donkey” or “Yeah, marrying her would mean listening to her talk all day, but I could use her money to buy ear plugs.”

Having some employees sign up for sports is like trying to convince a kid to eat its greens. Pay them for their time and give them lots of options, from soccer all the way down to Connect 4 board games.

8 – Have Each Member Tell Funny Childhood Stories And Fears

In small and intimate groups, you may test how well your team is gelling together by asking them to tell funny childhood stories and/or funny childhood fears. Start them off with some very personal such as, “I used to have a bear that I spent my youth wiping my nose on” and “I never used to eat tomatoes as a child because I thought I would choke on the pips.”
Do not allow team members to turn this session into a negative experience. Some people are just waiting to tell you how horrible their life is, and you must avoid this at all costs. If somebody starts a story with, “I was afraid when my step dad used to…” step in a try to remind the players that the stories have to be positive.

Stacey Marone is a freelance writer. In her free time she does volunteer work and helps individuals and organizations get better result in leadership and project management. You can follow her on twitter.