is a fledgling YouTube channel which consists of tutorials and informative videos about the use of RACI Matrix as a Project Management tool. Increasing number of managers have come to accept the importance of clearly defined roles and responsibility to the success of projects. The RACI Matrix has become an important tool in this regard. One can get a clear idea of this concept by reading our article on Understanding Responsibility Assignment Matrix. It is maintained by the RACI Change Manager (RACI.com) which is a cloud-based organization that supports a number of business industries. Much of the information is derived from Michael Carew’s compilation of over 30 years of experience working with Australian companies.

The videos on this channel are all RACI related, and they take the format of tutorials or just informative overviews with run-time ranging from 30 seconds to 5 minutes. They really are bite sized pieces of information to assist users of the RACI Matrix, so that they can maximize the benefits of using the charts. There are 18 videos on the channel and the number will continue to grow as the channel grows. Persons who would like to start using RACI charts, as well as those users who want to master the use of RACI charts, will find step-by-step instruction guides that are very clear and easily understood.

To date the most popular video on the RACI channel is a tutorial which is 5 minutes and 27 seconds long entitled ‚ÄòRACI explained: it’s simple yet powerful’. That video was uploaded on October 12, 2013 and has had just over 1600 viewers. It is an animated video which starts by defining RACI and explaining their use. It then takes viewers through the basic steps involved in the use of RACI charts.

The most recently posted video is the ‚ÄòRACI Affiliate Overview’ video which was posted on April 29, 2014. It is an animated infomercial which tells viewers about the RACI Affiliate program and its benefits. The video is 1 minute and 56 seconds long and it explains how the program works and the benefits to be enjoyed; it then directs viewers to the RACI.com website. The video has been viewed over 40 times since being posted a week ago.

Presently there is only one playlist that has been created on the RACI channel and it consists of 3 videos that are all RACI related. There is also a documentary with the title ‚ÄòChange or stay the same Ford 1943 to today’. The documentary looks at the evolution of the manufacturing process at Ford and the role of proper responsibility assignment. Managers who are interested in the benefits of responsibility assignment as a management tool will find useful videos on this channel. 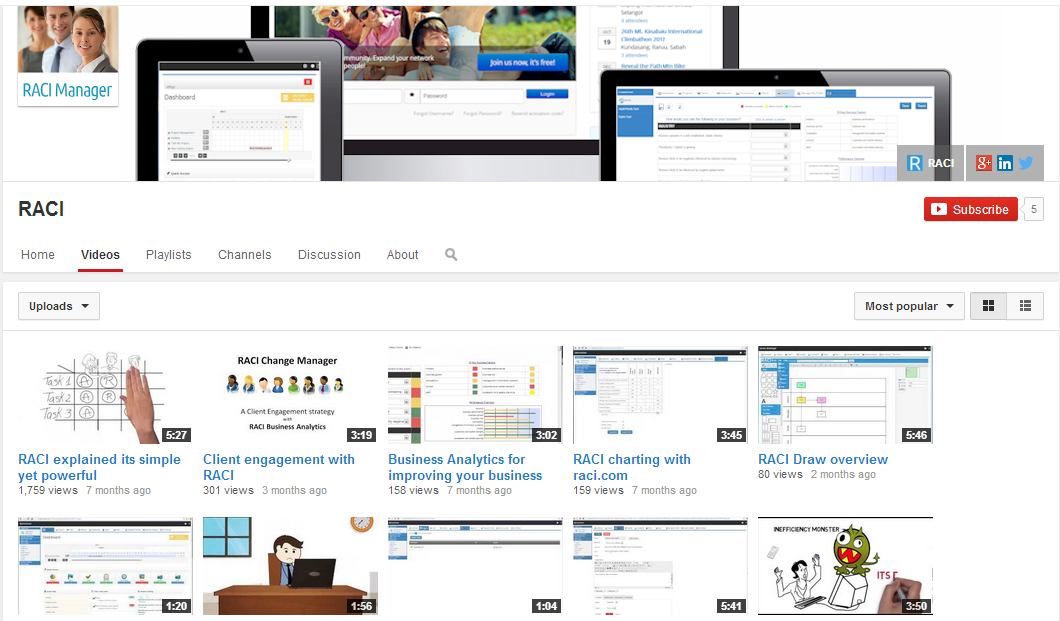