The Project Management Institute’s YouTube presence is through the PMI channel. This professional organization founded in 1969 continues with its purpose of advancing project management by offering research, resources, and other professional services to its members around the world. The PMI YouTube channel began in October 2009. It has a collection of 99 videos that introduces the organization, high-profile people and projects, awards, and other activities. Currently, there are 4073 subscribers following this channel, which has accumulated more than 157,000 views from the date of its joining in 2009.

Its collection of 99 videos deals mostly on the Project Management Institute as an organization. However, some videos also explain the benefits of PMI membership, certifications and credentials. It has several videos also about the different aspects of PM such as future outlook and special topic discussions. Some videos show interviews or talks of prominent people in the PM field and other specialties. The PMI channel also has several videos about winners and finalists of its yearly PMI Project of the Year Awards, which are real projects that have been planned and executed successfully. Most videos are short, between 2 and 4 minutes, but a few run for 15 to 25 minutes.

The most recently uploaded educational video in the PMI channel is one that shows Dr. Ed Hoffman and Jon Boyle, both from NASA, discussing the topic of sharing real knowledge through storytelling. It is a 14:47 minute video showing the two gentlemen in a casual setting discussing the power of stories in terms of learning lessons and in being more effective in organizations. This video was uploaded last November 7, 2013, and has been viewed 149 times. According to Dr. Hoffman, in his experience in NASA, storytelling is an optimum way of learning compared to the better but more expensive ways of doing and simulating. Mr. Boyle then shared that stories of how projects succeeded or failed are effective means of imparting information to and relating the personal situations of other professionals in the organization.

The PMI channel has several playlists in their collection of videos. One of these is titled Women in Project Management, with a total of 10 videos. Another is the collection of 20 videos for the PMI Project of the Year Award playlist. On top of the list of playlists is a collection of 9 videos titled Interviews from The Telegraph. The Telegraph is a UK media company which hosted a series of shows that interviewed several people who shared stories and experiences pertaining to important aspects of project management. For instance, one video showed Julian Foster, who is Programme Director at Heathrow Airport, explaining the importance of communication and imparting one consistent message very early on regarding the project. Other interview videos included Terry Cooke-Davies of Human Systems International, Richard Wilson of the Welsh National Assembly, and Paul Jones of Fujitsu UK. 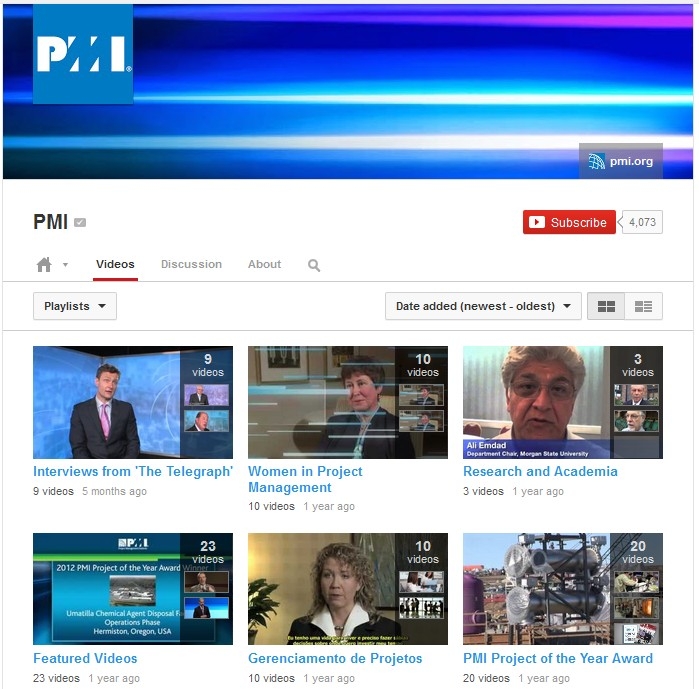