How to Get Microsoft Project for Mac 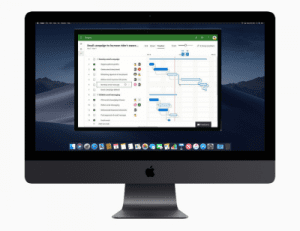 Project management enables all types of businesses across industries to have a greater chance of successful project delivery. Project management software makes it easy for professionals to adhere to PM standards and plan, execute, and track projects through to completion. One of the most deployed software is Microsoft Project, a program that runs on Windows. If a Mac user wants to use Project by choice or by necessity, is it possible to run Microsoft Project for Mac?

Why get MS Project for Mac?

Users realize the advantages of using project management software such as Microsoft Project to deliver quality products or services within scope, schedule, and budget. Mac computers are powerful and reliable machines found in many publishing firms and design agencies. But Macs are also present in many enterprises such as IBM, GE, Concentrix, Verizon, and SAP due to employee demand. Running Microsoft Project on a Mac computer makes perfect sense until one discovers that MS Project no longer runs on Mac computers or Apple devices. This puts many professionals in a bind since Project runs only on Windows OS and Mac users will not switch to a Windows PC.

How to get Microsoft Project for Mac

When asked how to get Microsoft Project for Mac, Microsoft’s official recommendation is for Mac users to try and use the complete web functionality of Project Online. Another popular suggestion is to install Windows on Mac computers.

Microsoft continues to update Project software because it is one of their most popular products. Recent updates show that MS Project cloud-based solutions are simpler to use, collaborative, and more flexible through online access. But Project Online has less features compared to the desktop version. Also, users need to subscribe to additional products or buy separate licenses for Microsoft 365, Teams, OneDrive, and SharePoint—which all add to project cost.

Another workaround to use Microsoft Project on a Mac is to install Windows operating system on Mac hardware. This is possible using Apple’s Boot Camp or using virtualization software.

Boot Camp is an Apple product that can split a Mac’s hard drive into two partitions, so users can install and boot Mac OS in one partition and Windows OS in another. Users can choose which operating system to run, and with Windows installed, they can install and run Microsoft Project normally as if using a Windows PC but with the power and display of a Mac computer. The disadvantage is that while running Project on Windows, all other Mac applications installed on Mac OS partition are unavailable. Also, experts recommend installing Windows on Mac computers with Intel processors.

Another way to install Windows on Mac computers is to use virtualization software. There is no need to create a separate partition for Windows because visualization software creates virtual machines (VM) that allocates disk space and memory to run Windows applications. Mac users can install Windows OS as if on a separate computer. Once installed in the VM, they can install any Windows software such as Microsoft Project where they can create new or open and edit existing Project files. The advantage is that users can access both Windows and Mac applications side-by-side. However, a VM consumes resources like a second computer running simultaneously, so it will affect performance. The top VM apps for running Microsoft for Mac are:

When project managers have to view and update MS Project files from clients or partners in their Mac computers, they have no choice but use Project or another software that is capable of opening MPP file formats. However, if similar functionality is the only requirement, there are more PM software options with more features and better capability.

A project management software for Mac can be compatible with MS Project files in the MPP file format. Some can open, edit, and save directly into MPP files. Others have the capability to import MPP files as well as export their own files into MPP formats that MS Project software can read.

For simply opening, viewing, and printing files, an MPP file viewer software is another affordable alternative. Some of these are Project Viewer 365, GanttPRO, MOOS Project Viewer, and Seavus Project Viewer for Mac.

Another option for professionals using Mac computers is to use online project management software that can import Microsoft Project MPP file formats and transform them into data that users can view, update, save, share, and export into more common formats such as CSV, XLS, XML, or PDF. These PM products have the same if not more advanced features than MS Project and serves the same purpose of providing project plans, schedule, timelines, tracking, collaboration, and reporting. All users need are their Safari browser to log in to the application and get real-time information as project progress happens.

Ready to try a Microsoft Project for Mac solution?

Microsoft Project is a popular Windows-only project management software. By developing it only for the Windows platform, it entices users on other platforms such as Mac OS to switch to Windows. On the other hand, Mac users are loyal to their Apple computers and will not easily give up their powerful machines. Although workarounds and alternatives are available, it is up to users to choose which solution fits their needs the most.