Microsoft OneNote is a note-taking app that works across platforms and different devices, including on the web. Users can jot down ideas, to-do lists, and other forms of information, bringing the app wherever they go. It is also built for collaboration, so users can share it with family, schoolmates, and co-workers who can view and co-edit notes.

OneNote allows users to enter information in an unbounded document window that has no enforced page layout or structure. Users can type text, create handwritten notes, insert tables, and attach photos and digital images into pages of a tabbed electronic version of a physical notebook. They can revise notes by typing, highlighting, or with ink annotations, and divide OneNote notebooks into sections and pages. Instant search allows users to find anything they have created or saved. New Fluid components give additional choices, such as adding different types of lists, tables, and paragraph formats.

OneNote supports multi-tenancy, so that more than one user can work on the same page at the same time with the app automatically saving data. Users can share multiple notebooks by inviting others through email or by creating a link to give others access to the notebook.

Users can sort their their content across different notebooks, sections, pages, and tables. They can use tags like Important or To-do on notes for faster search. The Draw tool provides several drawing and design features such as different tips and shapes that users can create using a stylus pen or a finger on a touch screen device. Other features include mix media attachment and web clipper. Microsoft OneNote for Windows 10 in particular can display feeds from different note-taking apps, insert Office files as a printout, mark notes with custom tags, search notebooks for tagged notes and text phrases, read math equations aloud, and switch to dark mode. 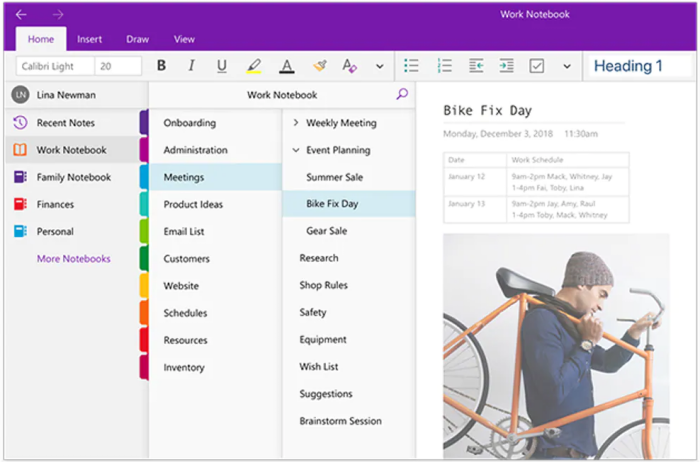 There are several versions of OneNote, which are all free to download and use. Also, OneNote syncs across devices.

Certain premium features are available with a Microsoft 365 subscription:

Individuals and teams can use OneNote for personal note-taking and notebook collaboration. Teams and organizations using Microsoft 365 can take advantage of OneNote’s integration and interoperability with other products, like Microsoft Office. Some of its customers are QA Limited, The American Red Cross, Zendesk, Lorven Technologies, and Pfizer. The OneNote app is also used by educational institutions.

Drug discovery teams in a New York-based pharmaceutical and biotechnology company deployed OneNote as a knowledge management app combined with SharePoint to improve collaboration. Used as a project notebook, researchers were able to record digital notes and share documents that resulted in a net decrease of email exchanges and volume of files stored on their servers. The teams feel that they are able to save up to 45 minutes per week with the note-taking solution.

A group of physics researchers in the UK use the OneNote app for their personal and shared notebooks. The group uses OneNote in different ways during the course of research, such as recording and tracking data of instruments, experiments, and group meetings. They find the app easy to use and intuitive, allowing them to find information fast, including from handwritten notes. The team can also tell who authored what contribution to notebooks and when, and share data with external collaborators by exporting and emailing PDF files.

Microsoft OneNote is a handy, flexible, and easy-to-use tool for recording and organizing notes in one place. It accepts a wide variety of input and file attachments, works across devices, is ready for collaboration, and freely available. Microsoft account owners can take advantage of OneNote to provide them additional conveniences in their work and research.

OneNote is a product of Microsoft Corporation, a publicly traded, American multinational company with headquarters in Redmond, WA, and offices in 190 countries. The company was founded in 1975 by Bill Gates and Paul Allen, who introduced the MS-DOS operating system for IBM personal computers. Some of its successful products are Windows, Office, Outlook, Xbox consoles, and Surface tablets. The company’s mission is to advance human and organizational achievement.