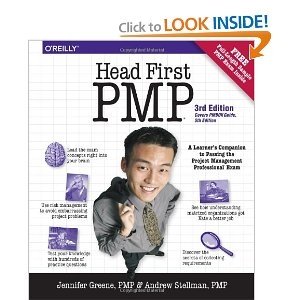 Head First PMP Third Edition is the latest edition of the best-selling PMP prep book from Greene and Stellman. It covers the latest PMBOK Guide 5th Edition. More than that, the book presents the topics in a way that it will be understood and remembered by readers to help them pass the PMP certification exam. Aside from a novel way of presenting project management concepts, it also has many practice questions, exam study guides, and one full-length sample exam.

The paperback edition was published in December 2013 by O’Reilly Media. It belongs to the Head First Labs series of books that are written in a brain-friendly way using stories and attention-grabbing tactics. It has 896 pages and about 1.8 inches thick. The cover has the familiar Head First theme of a photo of a person from the top angle, with the title in large fonts at the top part of the cover page, and the authors’ names displayed at the bottom part. ISBN-10: 1449364918; ISBN-13: 978-1449364915

Head First PMP is for project managers who are preparing to take their PMP certification exam. The book can also be used by those preparing for CAPM certification exam as many concepts are similar. The authors warned that it is not really recommended as a PM introduction book or reference book. It is also for those who are willing to try non-standard type of textbooks in order to pass the examinations.

An Amazon customer from California who passed her PMP exam described Head First PMP as an outstanding book. She noticed a few typo errors that can easily be worked through by those who are familiar with project management concepts.

J. A. Mohmmad from Saudi Arabia wrote about a day ago that he passed his PMP exam with the help of this book. He described it as enjoyable to read and starts the lessons from scratch.

Goodreads readers described the format as very engaging and great for visual learners.

Head First PMP is divided into an Introduction about the book followed by 16 chapters. Chapter 1 is titled Why Get Certified. It is an introduction about the PMP certification examinations and is further divided into 18 sections and an exam section at the end of the chapter. All chapters end with an exam section, with Chapter 16 as a practice PMP exam. Chapter 2 is about organizations, constraints, and projects. Chapter 3 discusses the process framework, and the succeeding chapters discuss the 10 knowledge areas, professional responsibilities, and review tips.

The approach of Head First PMP and other books in the Head First series is what makes it different from other textbooks. Based on a formula backed by research in neurobiology, cognitive science, learning theory and metacognition, it presents information that the brain interprets as really important, and thus, understood and remembered better. It uses pictures and redundancy in unexpected ways to trigger emotions that the brain pays more attention to. It uses personalized conversational style language because the authors believe that the brain also pays more attention when in a conversation.

Why Buy the Book

Project managers preparing for their PMP exams need all the valuable and relevant help they can get. Head First PMP has received great reviews since the first edition in 2007. It currently ranks in the top 5 of Amazon’s Best Sellers in three categories including #5 in PMP Exam – Project Management. It covers all the concepts needed and presents them in a more engaging way to make learning and reviewing more effective. Had this book been published before P-M.com came out with its Top 5 PMP Exam Books review in November 2013, it would surely have been included.

Jennifer Greene, PMP, has been working with the software development industry for over 15 years in various capacities. She has worked in development, testing, process improvement, development management and project management. She has lead teams in companies of different sizes, from startups to financial enterprises to global media companies. In 2003, she founded Stellman and Greene Consulting with co-author Andrew Stellman to provide project management services and training to both individuals and companies. She has written other books with Stellman under O’Reilly Publishing.

Andrew Stellman, PMP, is a BS Math and Computer Science graduate from Carnegie Mellon University and a Certified ScrumMaster. He has worked as a programmer, manager, consultant, Agile coach and is a partner at Stellman and Greene Consulting. He and Jennifer have worked as consultants in various industries including finance, media, entertainment, science and the academia. The other books he has co-authored with Greene include Applied Software Project Management, Head First C#, and Beautiful Teams.