Wunderlist acquired by Microsoft for more than US$100M 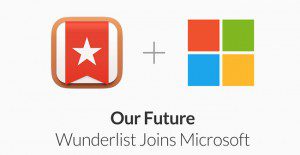 Wunderlist is a cross-platform productivity app that enables users to create and manage their to-dos in an organized and efficient way. It has been recognized and awarded as one of the best to-do list application by some tech media firms. It is beautifully designed, easy to use, and very helpful in allowing teams to collaborate, plan and share lists, create a reminder, send a notification, and even add web links and hashtags for filtering, all the while syncing in real-time across devices.

In the Beginning with Get Things Done!

Wunderlist is a product of 6Wunderkinder GmbH, based in Berlin, Germany. In the beginning, as is in the present, the goal of the company is simply to help individuals and teams get things done. With that in mind, they set out to build a productivity tool that not only handles both personal and professional to-dos but does it in the most delightful, simple and elegant way. Chief Design Officer Benedikt Lehnert stated that the company is successful in transforming a to-do application into a productivity platform that utilizes any device for any kind of task.

By the Numbers with 13M Free Users and 90K Paying Customers

To illustrate how successful Wunderlist is in convincing people of its usefulness, Lehnert cited that about 1.2 million to-dos are created in the average working day. In 2014 alone, about 199 million were created. With its total customers numbering to over 13 million, between 770 million to 1 billion to-dos have so far been created in the five years that the company has existed. About 90,000 teams worldwide use it as well. As such, when Microsoft acquired 6Wunderkinder in June 2015, the price range was said to be between 100 and 200 million US dollars.

Microsoft has been continuously reinventing productivity, and with its focus on mobile and cloud computing, the acquisition of Wunderlist is seen to be in line with this direction. In the previous year, it also acquired calendar app Sunrise, and email app Acompli, which has been rebranded as Outlook for Mobile. And together with Office, OneNote, and Skype for Business, Microsoft is demonstrating its intent and commitment to deliver apps to its customers that cross platforms and devices, providing notes, calendar, email, messaging and now, task management capability.

6Wunderkinder Founder and CEO Christian Reber recalls with amazement how his dream and a smart, creative and talented Berlin team started with an aspiration to also reinvent productivity with a to-do list app that now has grown and continues to grow. His company was the first start-up in Berlin that received funding from Sequoia Capital of California. Other investors include Atomico Ventures, Earlybird Venture Capital and Thrive Capital. And Wunderlist continues to become popular, with its integration with other productivity tools through its API, such as SnapChat, Sunrise, Scanbot, Zapier, OneNote and, recently, HipChat.

For now, nothing will change for Wunderlist customers, according to both CEO Reber and Microsoft. The free app will remain free, and there will be no price changes for the Pro edition at still $4.99 per month. The service will also continue to support a wide range of third-party apps and integrations. Reber, who continues to lead the team, plans to introduce a host of new features and add partner integrations. For instance, Wunderlist for Windows 10 was launched in October. Microsoft is also excited to build on and apply Wunderlist’s innovations to its apps and services. For more Wunderlist news and update, visit their Twitter, Facebook or Google+ page.