What we can Learn from Famous Leaders 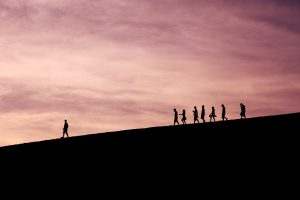 Throughout history, inspiring leaders in many fields have empowered their followers, implemented change and paved the way for success. These are the people that have altered history by leading their nation, army or team through even the toughest times. And we can learn a lot from them and their approach to leadership. Read this article to find out more.

As a leader, you mustn’t keep your vision a secret. How will your team perform if they don’t know your expectations? Explaining the vision also acts a good motivator, building an atmosphere of inclusiveness and trust. Once your team know the vision, they can also start to get as passionate and excited as you! You’ll have a loyal team that want to follow you and help you achieve your goals.

Steve Jobs, of Apple and Pixar fame, understood this perfectly. He was a passionate leader with a strong vision. He knew what he wanted to achieve and how to achieve it. Steve aimed for perfection and believed anything is possible. He achieved his vision by surrounding himself with the very best engineers. He also disliked emails, preferring face-to-face communication to encourage innovation. Pixar’s office was even designed to encourage such communication amongst team members.

Because Steve shared his vision and energy with his team, he was able to inspire them and push them to do their best. As a result, Apple and Pixar have created cutting-edge products and films that give us hours of enjoyment.

Equip your team for success

You may think that a desk, computer and salary are all your team needs. But this is wrong. If your team ask for extras, whether that be new software or training, then you should take their concerns seriously. Old software, broken equipment and no benefits (like training, pension, bonus or socials) means your team may become demoralised and lack productivity.

As a leader, you should equip your team for success. If they voice a concern, do what you can within your budget, or escalate the issue. You may have heard this quote before: ‚Äòan army marches on its stomach.’ This was said by French emperor Napoleon Bonaparte, who famously ensured his troops had the food and supplies they needed. He believed, quite rightly, that if an army was underfed and not well-equipped, they couldn’t be expected to fight to the best of their ability.

Because Napoleon looked after his army so well, he inspired a great sense of devotion amongst his troops and citizens, which boosted morale and won battles. These military successes made France a world power and Napoleon was able to implement great societal change, promoting education for everyone, religious tolerance, fair laws and greater property rights.

Many of us resist change. This can be down to fear, mistrust, lethargy, or we may have totally rational concerns. However, as a leader, you cannot be scared to take risks and make much-needed changes. Get into the habit of weighing up the pros and cons, deciding and following through.

Someone who wasn’t scared to take risks was Elizabeth I of England. This Tudor monarch was leader at a time when women didn’t have many rights. It was risky being in charge, not only because she was a woman, but also because she never married. This was a big no-no in society back then and would have made her a target of gossip. However, she wasn’t scared and was willing to change the expectations placed on female monarchs so that she could rule England effectively.

Elizabeth also established Protestantism in England, a move that risked a big fallout with Catholics in her kingdom. However, her tolerant approach won her their respect. Though her reign was marked by many risks and changes, it all paid off in the end, as she defeated invasions, improved society and was admired by her nation.

New leaders often think they must be aggressive and cold in order to gain respect. They may assume that compassion or friendliness are signs of weakness. In their desperation to show they are ‚Äòthe boss’ they might forget to listen to their team or clients and demonstrate an inability to negotiate.

Empathising with both team and clients is vital. You must also be able to listen and negotiate, especially during times of conflict or when the pressure is on.

Perhaps the best example of a leader who can do these three things is the current Dalai Lama, Tenzin Gyatso. His apparent compassion for everyone is a crucial leadership lesson. His warmth and ability to listen means he builds trust with political and religious leaders, as well as the average person. He is then able to negotiate peacefully, dispel conflict and establish relationships.