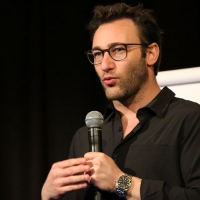 Simon Sinek was born in 1973 in Wimbledon, England. He received his Bachelor in Arts degree in cultural anthropology from Brandeis University, and is a trained ethnographer. In 2007, he started his company in New York based on a concept he discovered. He has always been fascinated by leaders who made an impact in the world, so he studied them. He discovered remarkable patterns in how some companies and individuals think, act and communicate. He called this pattern the Golden Circle.

The Top 10 Rules For Success

In 2010, Simon gave a TED talk about how great leaders inspire action. In this talk, he explained further the idea of the Golden Circle, why some people, leaders, messages, and organizations seem to inspire people. Since then, that talk has become the third most watched in TED, hitting more than 30+ million views, and has been subtitled in over 40 languages. In this YouTube video, which is part of Evan Carmichael’s Top 10 series, Simon Sinek shares his rules for success.

He shared a story where he and his friend participated in a fun run, and at the end of the race were free bagels for the participants. Simon’s thoughts were on the free bagels, but his friend’s was on the long line. He then realized that people see the world in 2 ways: some people see what they want, while others see the thing that prevents them from getting the thing that they want. So, Simon went to the front of the line and reached inside the box to get 2 bagels, and no one complained. He then explained that people can really do what they want, they can break the rules, but they should not get in the way of others from getting what they want.

During an interview, Simon Sinek shared that just like everyone else, he experiences the same pressure. Pressure could be about time, performance, financials or deadlines. What has helped him to perform better under pressure is by interpreting the stimuli in a different way. Similar to how he observed Olympic-class athletes interpret it, during times of pressure, he has trained his mind to interpret his reactions as getting excited rather than getting nervous. With repeated practice, it has made all the difference in his response to rather rush forward than pull back in times of pressure.

Simon shared that many of the smart and ambitious young people he has talked to seem to be very impatient. They treat the sense of fulfillment in professional careers and personal relationships as scavenger hunts, things that have to be discovered. And when they do not find it quickly, they tend to quit or move on to the next. But he explained that most of life is a journey. People became successful at their careers and in their personal relationships because they worked at it every single day, whether to serve their organizations or to stay in love.

He told the story of how in the 18th century, doctors were able to bring down mortality rate in mothers during childbirth by simply sterilizing their equipment and washing their hands. However, they could have done it 30 years sooner if only they had humbly listened to a colleague, Dr. Oliver Wendell Holmes, Sr. , who pointed out that they doctors themselves are transferring the cause of the disease. The lesson is that people can take all the credit they like for doing great things, but they should also be ready to take accountability for the wrong things they have done.

Simon Sinek gives talks to many companies, including Microsoft and Apple. In a comparison, he shared that a company whose goal is to beat another is more likely to get frustrated than a company whose goal is how to create better products than the previous ones they have made. He stated that true joy does not come from outdoing one’s competition, but from advancement of outdoing the previous version of one’s self.

Simon explained in an interview that he is at his best when he is an environment that is supportive. He states that he likes to stack the deck, or to put himself in a position of strength. He states that he does not recall a bad engagement, not because he is a genius, but because he chooses to be in an environment where people actually wanted him to be there. This mutual support places him at his best.

As an example of a great leader, he mentioned Nelson Mandela as someone universally respected across the world. One advice that Mandela gave to be a great leader is to be the last to speak. Simon recommends this to many business leaders, especially during meetings. Letting others speak first gives people the feeling that they have been heard and have contributed. It also gives the leader an idea what everyone else thinks before he or she gives his or her own opinion. So practice to keep your opinion to yourself until the last moment.

Simon Sinek explains that communicating the things that organizations and people really believe in draws people who have the same beliefs. It is a natural form of survival. It creates trust. On the other hand, telling people what they only want to hear is deceitful, and as soon as they sense a lie, they will lose their trust and keep their distance.

Simon believes that finding one’s passion should not be difficult. Any person has something that they enjoy doing, will do something for someone for free, or pay money to see for themselves. Passion is a result of being able to do something that one enjoys doing. Even though he enjoys the arts, it does not mean that he should have a career in the arts. What he enjoys is the ability to explore ideas and interpret ways to look at the world. The ability to inspire people through his books and speeches allows him to do that just as well.

Successful people think, communicate and act in a certain way that is opposite to anyone else, according to Simon. He discovered that by starting with the question why, as in why do this thing, what is one’s purpose, cause, or belief, before answering how, and what, people are able to inspire, communicate better, attract people and appear more trustworthy. He added that to make a profit is not an answer to the why question, but only a result of doing things successfully.

Simon Sinek is a best selling author of books based on the concept of the Golden Circle and start with why. Knowing his purpose, he stated that he made decisions that he would rather be happy than right, to be good than to be rich, and to be with people he can support and get support from. Thus, every speaking engagement gives him excitement and a feeling that he has contributed to the betterment of society in general.