ProjectManagerVideos is a YouTube channel that informs and trains viewers how to manage projects through PM training videos uploaded every week. This channel is maintained by ProjectManager.com, an online project management software company. The company was founded in 2008 in New Zealand, and today, it is being used in more than 100 countries. Currently, ProjectManagerVideos has more than 14,000 subscribers. Subscribers are viewers on YouTube who can instantly know of recent updates, activity, ratings or discussions of a particular channel. From the date this channel started on March 27, 2011, its videos have been viewed 1.48 million plus times.

ProjectManagerVideos has about 138 videos on its channel. Most of them are training or tutorial videos about project management principles and terms, practical tips, and guides in using software tools for projects. Some videos are animated presentations or slideshows, but many videos show a person or trainer in front of a whiteboard discussing the topic. Most comments posted by viewers show appreciation of the videos uploaded, while some ask about particular topics. Average video length is usually more than 2 minutes but less than 10 minutes.

The most popular tutorial video on this channel is titled Top 10 Terms Project Managers Use. It was uploaded in April 2012 and has been viewed more than 76,000 times. It is about 9-1/2 minutes of a whiteboard session regarding popular PM terms. The video presents 10 common terms that are sometimes vague, misused or assumed as understood by everyone, so it is important for new project professionals to be familiar with the proper definition of these terms. For example, the first term refers to the initials WBS, sometimes referred to as “weebis ” but is really the acronym for work breakdown structure. Another important term is milestone and sometimes represented as a black diamond. Other essential terms to be familiar with include baseline, triple constraint and project lifecycle.

ProjectManagerVideos most recently uploaded training video is titled “How to Manage Stakeholders Expectation”. It was uploaded December 2, 2013 but has already been viewed at least 180 times. It is about 8:33 minutes long and is hosted by Jennifer Whitt, a project director of the company. It is a whiteboard session that discusses a common complaint among project managers regarding stakeholder expectations. She gave a set of reminders that will help identify the real stakeholders and understand where they are coming from. She also identified some common queues that can warn of misaligned expectations. At about 3:59 minutes of the video, Jennifer mentioned some of the preventions that can be made to keep stakeholder expectations in alignment. This includes documenting the stakeholders in the project charter or project plan, knowing them personally, and informing the team about the stakeholders.

Aside from the PM tutorials and software guide slideshows, the channel also has a PM webinar playlist. A playlist is a set of videos grouped together for viewers to watch one after the other. ProjectManagerVideos has a PM training playlist composed of six 1-hour videos that discuss topics such as how to be a great leader, how to manage projects, PM trends, managing teams, how to track projects, and managing time. For instance, the first video of the series is titled How to be a Great Leader. It was uploaded in December 2011, about 43 minutes long, and has been viewed over 14,000 times. It is a slideshow where the voice of Jennifer Whitt is heard discussing topics such as understanding leadership, gaining influence, and developing oneself, among others. Compared to the regular videos, the audio of the webinar is not as clear, but still generally understandable. 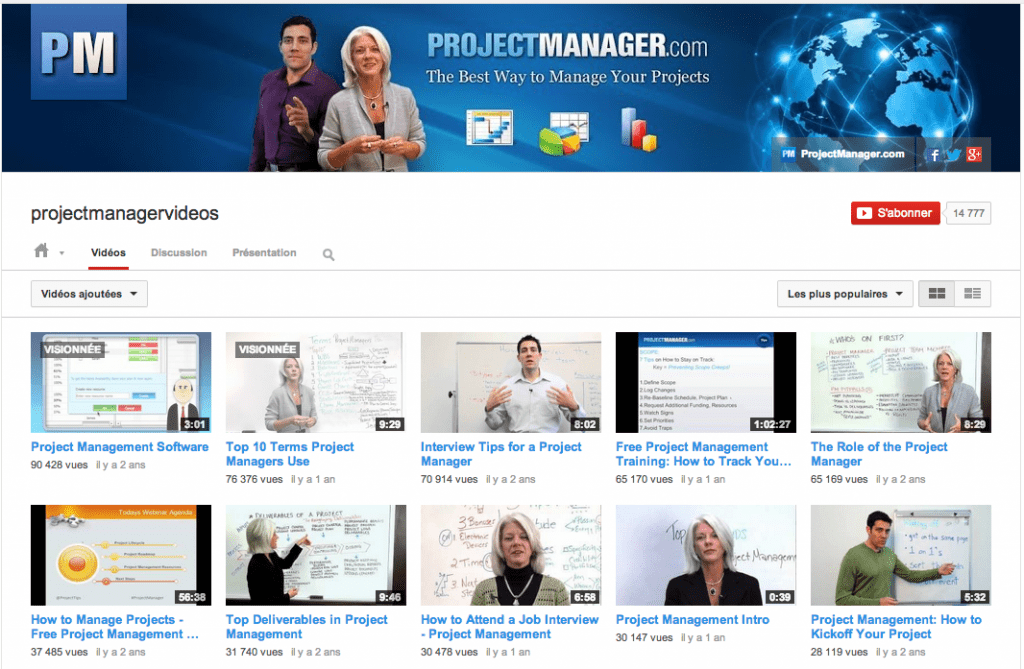