Project Management Tutorials is a YouTube channel that has a collection of instructional videos on various project management topics as well as virtual design and construction topics. The channel owners chose not to provide much detail about themselves. Descriptions of the videos are also minimal, providing very little description, information about the owners or source of the videos. However, the channel which started in March 2008 has been subscribed to almost 1,400 times. The channel also has garnered over 343,000 views.

Project Management Tutorials channel has an impressive collection of 173 videos. Although not all of them are PM tutorial videos, many of the most popular ones are. Among them are topics needed for PMP certification, such as critical path method computations. It also has a few MS Project tutorial videos on how to create a work breakdown structure or a project cash flow using the software. It also has several half-hour tutorials on major PM processes such as project time, project quality, and project scope management. Aside from PM videos, there are also a good number of virtual design and construction learning materials, drawing software tutorials, and architecture videos.

The most popular video on this channel is a short tutorial about a PMP-required topic of critical path method, specifically titled Doing a Forward Pass-Part A. The almost 2-minute video was uploaded in August 2010 and has been viewed over 44,900 times. From the title, it is evident that it is the first part of a tutorial video. Although there is no part B of the same title, there is a 3-minute tutorial video titled PMP CPM/Doing a Backward Pass-Part B, which would likely be the complementary half of this most popular video. The video points to a blog site where handouts can be downloaded. The video then shows a drawing of a network of activities with durations. A male voice is heard while the drawing is filled up with values to determine the earliest date of completion.

The most recently uploaded video on Project Management Tutorials channel is a discussion on the difference between Project Leadership and Project Management. It is another short video of about 2:20 minutes uploaded on March 29, 2013. It has been viewed 647 times so far and shows a popular type of presentation called whiteboard animation, fast drawing, or video scribing. The video does not have any voice-over but only a background music. Texts being written, images being drawn and pictures being posted try to show the difference between the two roles. The main idea of the video seems to be about defining management as maintaining the course while leadership as about change and altering the course.

One of the more popular PM training videos in the Project Management Tutorials channel is titled Agile Project Management – An Introduction. It is almost 36 minutes long and was uploaded in December 2011. It has been viewed at least 28,000 times. The video seems to have come from a CBT Nuggets tutorial which shows a computer screen that displays some digital handwriting and accompanied by a male voice-over. It explains very well what agile is not, making some comparisons with traditional software development. Then it explained what agile is, particularly its iterative and time boxed nature and its own style of project planning and management. Midway through the video at about 17 minutes plus, the video discussion gave specific tips on how to implement the agile methodology. 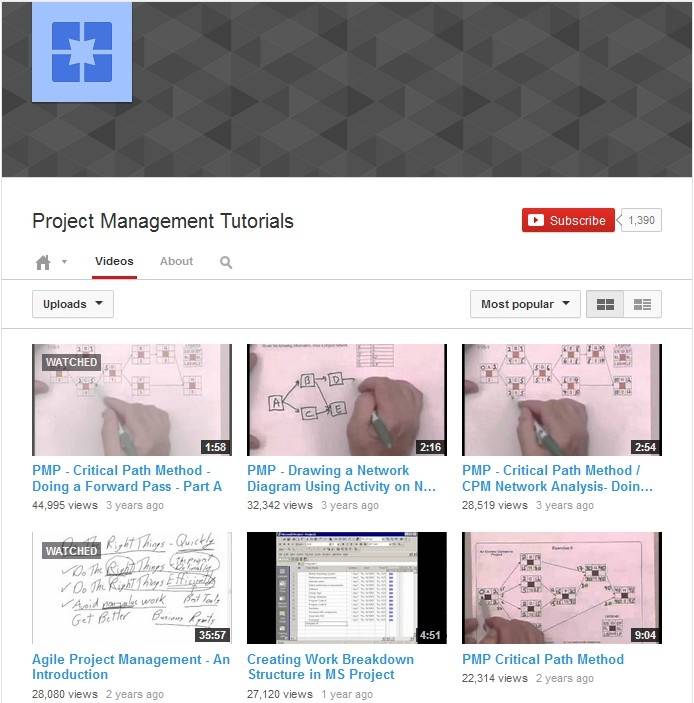