Producteev is a task management platform that offers more than just a computerized to-do list. Since its launch in 2008 at the Le Web conference in Paris, it has now more than 2,000 paying customers, some of which are big names in their respective industries. What started as a simple web-based task management application has now evolved into a platform that allows users to collaborate in many ways and with many devices.

Producteev defines a Workspace as a place to create and organize tasks. Every Workspace is free for up to two users. A free Personal Workspace has all the features of the web application, is accessible through mobile and desktop applications, and uses secure SSL encryption for its cloud services. However, collaboration is limited to only one user, file storage is only up to 500 MB, and support is through forums.

In contrast, a Team Workspace is a paid account with the same features, accessibility, and security as the Personal Workspace, but has unlimited invites for collaboration, with unlimited file storage, and priority email support for the team.

Bulk discounts are offered, with higher savings for more paid workspaces. Paying for the whole year will include a free first month. Producteev is flexibly designed for the individual with simple to-do lists as well as for several teams that need regular communication and collaboration. An individual or team members can immediately make use of the system even if they are beginners to such kind of computer or web applications. It is well-suited to teams whose members use diverse systems, applications, and devices to keep in contact with each other.

The latest version is available in English, French, Italian, and German.

Some of Their Clients

“I use Producteev to manage our team’s tasks and projects.” The integration features to email and flexible labeling allow Mark H. of Skullcandy to identify to-do items, track priorities, understand related activities, and see which member is doing what task.

“Producteev takes the stress out of to dos.” Stanford University’s Alexa L. relates how she captures every to-do item and proceeds with her day, knowing that she can access them from anywhere, at anytime. She calls it as her essential go-to productivity and creativity tool.

“We have named Producteev our ‘Personal Assistant’,” says Denise K of BPCM. She describes how it has simplified their to-do lists and allowed her colleagues to work more seamlessly as a team. She is thankful for the tool, allowing her and her team to keep up with their daily tasks, set and meet appropriate deadlines and track weekly progress.

The most compelling reasons to use Producteev are its capability to allow users to manage tasks and projects in a simple and sensible way with whatever device, system, or application they are most comfortable with, be it a web application or an email. Users can hit the ground running. It is very flexible and scalable, feature-wise and cost-wise. It can cater to a range of task and projects, from simple to complex. Integration with popular applications such as instant messaging, email clients, and even Google Calendar makes it powerful yet unintimidating to use for many. With a neatly designed Workspace and a feature-rich Settings page, it puts everything under control of the user, so one or many can work the way they do, only with better results.

Producteev from New York was one of the 30 companies who participated in Le Web 2008. It received funding and raised about 2 million dollars to further develop its task management application. In the end of 2012, it has been acquired by Jive Software, a social business software company from Palo Alto, CA. Producteev CEO Ilan Abehassera described the future of the company to be stronger, with integration points to Jive for more collaboration not just limited to tasks. 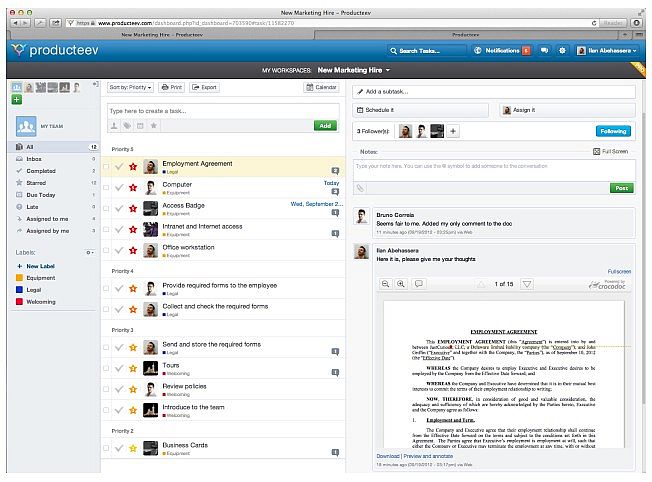