Passing the PRINCE2 Exams For Dummies – A Book 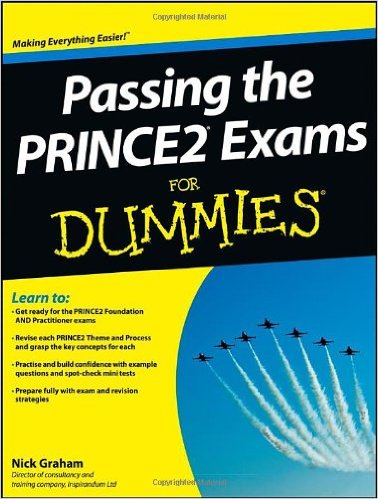 In 2014, about 182,000 people took PRINCE2 certification exams. In the UK, about two-thirds of all project professionals are PRINCE2 qualified. This PM method certification is being taken by more and more people all over the world. In the UK, it is already a pre-requisite for many new project management roles. There are also many training companies that offer courses for passing the certification exams. The book Passing the PRINCE2 Exams For Dummies is a helpful guide for people preparing for Foundation or Practitioner exams.

This paperback edition was published in April 2013 by Wiley Publishing under the For Dummies series. It has 344 pages and is about 0.8 inch thick. The front cover displays the familiar yellow and black For Dummies theme with the title written across the upper to middle portion of the page in large fonts. The author’s name is displayed on the bottom left corner, with a photo of acrobatic planes on the lower right portion. ISBN-10: 1118349652; ISBN-13: 978-1118349656

Passing the PRINCE2 Exams For Dummies is, as the title suggests, for people who are preparing for PRINCE2 Foundation and Practitioner exams.

Steinar Heskestad described the book as exactly what he needed to pass his Practitioner exams.

Passing the PRINCE2 Exams For Dummies is divided into 5 parts and 22 chapters. The first part is an explanation of the exams and contains 3 chapters that discuss some background about the exams and the format of the questions used in the exams and in the book. The second part is a review (British: revision) of the 7 processes covered one at a time from Chapters 4 to 10. The third part is a review of the 7 themes from Chapters 10 to 17, while the fourth part containing Chapters 18 and 19 is a review of the method as a whole. The last part containing Chapters 20 to 22 provides some hints on how to be ready for the exams and also some pointers on how to understand the product-based planning technique used in PRINCE2.

The book uses language that is easy to understand, and where there are special terms, definitions are usually provided. The book uses topic headers, lists, checklists, clarifications, quizzes, and practice questions for both Foundation and Practitioner exams. It also uses icons as special markers, and also have comic images. The book is clearly organized and written as a reviewer and exam practice workbook, not as a textbook to explain or learn about PRINCE2.

Why Buy the Book

Getting PRINCE2 certified is becoming a pre-requisite to getting a new job, contract or even a promotion, as this PM method has become popular and widely adopted. Passing the PRINCE2 Exams For Dummies is a useful companion tool to the official manual or as one takes a course in preparation for taking the exams.

PRINCE2 Study Guide by David Hinde is another reference to help readers prepare for the certification exams.

Colin Bentley’s The PRINCE2 Practitioner is a practical reference for those who are preparing especially for the Practitioner level of exams.

Nick Graham is the Director of Inspirandum, Ltd., a public company specialized in professional project management training and coaching. It was founded in 2000 and is based in Weymouth, Dorset, UK. Nick received a Bachelor’s degree in Education specializing in Curriculum Studies and the Psychology of Education. He has been involved with projects and project methods for over 25 years. He is also a Partner in Anglo-Swiss Projects, the creators of the PRIME project management method, a simple, complete and ISO21500 compliant method. Nick has authored/co-authored several books including Project Management Checklist For Dummies.