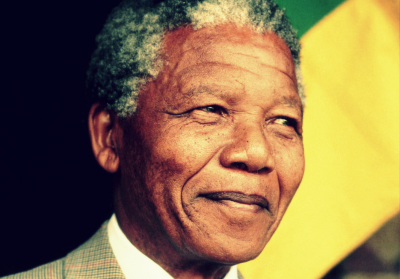 Nelson Rolihlahla Mandela was born in a small village in the Eastern Cape of South Africa. His father was a local chief and councilor of the Thembu monarchy. His mother was a devout Christian who sent him to a Methodist school. His teacher gave him the English name Nelson. He attended Clarkebury Methodist High School and completed his junior Certificate in 2 years. He then moved to Healdtown College, then worked on his BA degree at the University of Fort Hare. However, as a member of the Student’s Representative Council, he participated in a boycott against the quality of food, for which he was suspended.

He studied law at the University of the Witwatersrand. But because of spending too much time in political activities, he failed to get his degree. He joined in the political struggle for equal rights. He led many movements, gave speeches, and joined in defiance campaigns. He was convicted in court and served 27 years in prison. He ran in the first free elections and became the first black South African president.

The Ten Rules For Success

Nelson Mandela helped South Africa become a multicultural democracy as its first black president. After his term, he devoted his time as an elder statesman and focused on fighting poverty and AIDS through the Nelson Mandela Foundation. This YouTube video shares the ten rules that Mandela promoted, fought for, and lived by.

Nelson Mandela was sentenced to life imprisonment in 1964. He recalled during a TV interview that on the first day in prison, he put his foot down, insisted to be respected, and told the guards that he will only respond to the name Mandela or Mister Mandela. He stated that the battle for dignity must be fought on the very first day.

Mandela experienced apartheid in South Africa since he was a young man. The government institutionalized racial segregation and discrimination until its abolition in 1991. He remembered a phone conversation with a white female where she became very cross and demeaning to him when he was just asking who it was that he is speaking with. She suspected that Mandela was a bad person and someone who has not passed his matric (matriculation) or university entrance exam. She insulted him that he will never be in the same class as she. He was recalling this story when he was invited to give a speech at Harvard University in 1998. He closed the story by telling the audience how he wished that lady was there to see him, clearly achieving more than passing his matric.

3. Use Your Time Wisely

Nelson Mandela explained that people have only a limited time to stay in the world. Leaders, especially those in the government, should try to use their time wisely. These national leaders should make use of their time to transform their country to be better for all its citizens. Oppression was such a poor use of that time, he stated, and it benefited only a minority, which really angered him.

During his time fighting for the rights of Africans in his country, Mandela stated that he found himself drawn to the idea of a classless society, which had similarities to shared and communal African culture. When he was elected President, he was asked in America if his government and party economic policies were geared towards a Marxist, socialist, capitalist or some combination of sort. He responded that they are practical men and women who are aware of the existing conditions in the country and will act in the appropriate way. He stated that they are not concerned about models or labels, but will choose ways that produce results.

In trying to raise awareness of the rights of black South Africans, Nelson Mandela was readily accepted and trusted by his countrymen. In a TV interview, he recalled that humility is one of the most important qualities that a person should have. He explained that a humble person is easily recognized as not a threat by others. Only in that situation will people begin to listen to what you have to say, and embrace your cause.

Mandela once expressed that Muhammad Ali was his boxing hero. He had a lifelong interest in boxing. He stated that when he heard that Ali greatly respected him, it made his day. When asked which 20th century leaders he admired, he clarified that it is not about being a leader that is admirable. He explained that any person who could make an ordinary human being feel important or that he or she matters, where that person can go to sleep without fear and be full of hope is someone worth admiring.

During a TV show in America, he was asked if, since he expressed admiration in Arafat, Gaddafi, and Castro, these are models of future leaders that will rule South Africa. He replied that it is a mistake for a political analyst to impose his own country’s enemies as enemies of every other country. Mandela explained that these leaders supported South Africa’s struggle not only in rhetoric but placed resources for their disposal to support their struggle. He stated that their stand is simple: their attitude towards any country is determined by that country’s support towards their anti-apartheid struggle.

When Nelson Mandela was elected President, he reassured South Africa’s white population that they will be protected by and represented in government. He stated that although the majority looks at the white population as the enemy, he firmly believed that talking with them is the right approach. If he allowed hatred to overcome rationality, South Africa will be destroyed as a country. Instead, he worked hard to transform a minority ruled apartheid government become a multicultural democracy.

9. Be Willing To Die For Your Cause

Mandela was found guilty by the apartheid government to have committed conspiracy against the state. During that proceedings, he gave a 3-hour speech stating that he is prepared to die. He genuinely believed that he and his co-accused will be hanged. In an interview many years later when he was already free, he told the reporter that it is the wish of every freedom fighter to end his or her struggle in a glorious way rather than disappear in a shameful way. He elaborated that he exclaimed it not because he was brave, but because it was his duty to leave a tradition of bravery and determination, even in death.

During an interview by Ted Koppel in a US TV show, Nelson Mandela stated that a person who changes his statements depending on who he or she is dealing is not an ideal person who can lead a nation. He stated that Koppel commended him for refusing to be drawn in the differences internal to the US. Thus, he is confused why Koppel expects him to involve himself in the internal affairs of Libya and Cuba. He told Koppel in his show to be consistent.

Nelson Mandela died in 2013. He was called the Father of the Nation for helping South Africa achieve national reconciliation and a more peaceful and equitable nation. He has received hundreds of honors including the Nobel Peace Prize. His philanthropy continues on through his foundation. These rules are a sure guide to anyone who may seem to face great odds but eventually overcoming them and achieving success.