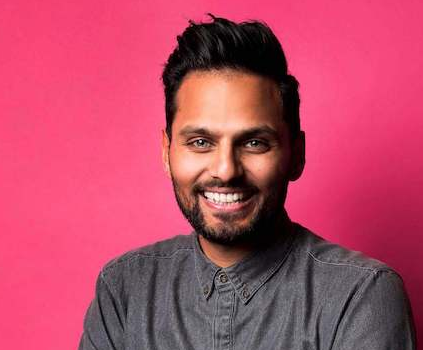 Jay Shetty was born in 1987 in London. Like most teenagers, Jay tried experimenting with the world as he was trying to find his identity. When he was 16, he lost two of his best friends. Although these events deeply saddened him, it also made him appreciate life more. He went to Cass Business School because of his interests in philosophy and behavioral science.

While at school, Jay heard Gauranga Das, a Hindu monk speak. He was so inspired by what he heard that he decided to be a monk. So, after graduating with a BSc degree in Behavioral Science, he became a monk at 22. For 3 years, he went across India and Europe studying eastern wisdom and philosophies including breath control and meditation. At the same time, he also helped others and volunteered to teach, build villages, distribute food and coached young professionals. In returning to London, he spent much time learning about what was happening in the world. He learned about videos and the Internet, and used that platform to share what he learned as a monk and made it relevant.

In 2016, Jay Shetty was hired by Huffington Post in New York to be a host of its lifestyle program. Among the people he has interviewed are Tim Ferriss, Deepak Chopra, and Russel Brand. He has moved on from HuffPost to work with the biggest global brands and give keynote speeches in organizations such as Google, Facebook and Microsoft. In this YouTube video from Evan Carmichael, we summarized Jay’s 10 rules for success.

1. Be exposed to new experiences

In an interview, Jay shared that only when he saw and heard a monk speak in school did the idea of wanting to be one came upon him. Had he never met the monk, he would not have any notion or inkling to become one. But since he is very interested in behavioral science, he felt that only in becoming a monk will he be able to better understand his purpose and master the mind. He believes that the first step to success is to open one’s self to new experiences and new role models. In his words, “You cannot be what you cannot see.”

He has been invited by big brand corporations to help them with their products. What he tells them is to believe in their message. He explained that he only feels confident in talking with people because what he talks about is personally meaningful to him. He advises people to only share messages that resonate with their heart and head and intelligence. If they do not believe in what they speak about, they will always struggle to articulate it, and even if they are able to, they will feel empty inside.

4. Know your Element, Environment, and Energy

He believes that every person has an element, environment and energy that they thrive in. As an example, if Michael Jordan, whose element is basketball, is made to play baseball, he would not be as successful. The same goes with the environment that surrounds us, and the energy of a person. Some people thrive in high energy, high pressure environments, others do not. If any of these 3 are out of alignment, it will cause problems. Thus, knowing one’s element, environment and energy will keep the individual aligned with what helps him or her thrive.

Jay explains that it is impossible to do things perfectly the first time. The reason we always hear the cliché ‘practice makes perfect’ is because it is the truth. To be good at something, one must invest in it with all their lives. Aside from being open to feedback and expert insight, one has to practice. The more a person does something, the better he or she gets at it.

He suggests to his viewers an exercise of imagining they are 70, 80 or 90 years old, and writing on paper what they regret not doing. He explains that this exercise of using the future to empower the present enables people to start planning, preparing and trying in the here and now. If they start now, they will not have to feel regretful when they reach old age of not doing something they wanted to do all along.

Jay Shetty shares 2 paths for finding passion. It involves finding the intersection among 4 points: what am I good at, what do I love, what does the world need, and how do I get paid for it. Finding the intersection will help a person unlock his passion and find his purpose. The first path is for people find their skillset, engage it to help people, and get better at it. The second path is what Gandhi suggested. Just start helping people, and then notice what it is that you enjoy as you help others, and what you are good at in helping them with.

The first recommendation he gives when facing challenges is to be okay with whatever feelings one has at that time. It is okay to feel sad, or weak, or unstable when one is going through tough times. One thing to remember though, feelings need not be permanent. The second recommendation is to review how people got through the same challenges in the past. Because he believes that whatever challenges people are facing today, we, as humanity, have faced it before.

Jay shared the examples of Brian Acton, JK Rowling, and Bill Gates, who experienced failure at first. However, they became very successful people because they continued to move on from their experiences. He believes therefore that in failure, people just need to widen their scope, build themselves and get ready for the next level. In the end, because of the initial failure, what the 3 people and others realized was something greater than what they envisioned in the first place.

He shares that in life, people can be passengers or a pilot. Although being a passenger seems to be easier, they always end up somewhere they do not want to be. In those moments, they can switch seats and take control of their destination. Therefore, they have to choose, to be a pilot or a passenger, because they can not be both.

When Jay Shetty came back to London 3 years after being a monk, he has to move back in with his parents. However, he began updating himself with the current situation in the world. Then friends started inviting him to speak at their companies. Today, his videos have over 1 billion views and has 100 million followers. We hope that his thoughts and messages will be able to help readers be successful in their chosen path, passion and purpose.