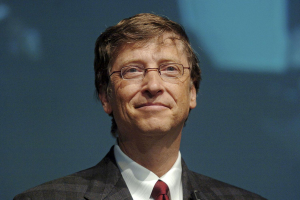 William Henry Gates III, or Bill Gates, was born in Seattle, Washington. His father was a lawyer and his mother was a businesswoman. At a young age, Bill showed great interest in computers and programming. His first computer program was a game of tic-tac-toe where a player competes with the computer. At the age of 17, he already formed a venture with fellow computer enthusiast and childhood friend Paul Allen to count traffic using an Intel processor. Eventually, Bill and Paul would found Microsoft.

Bill Gates co-founded Microsoft in 1975, partnered with IBM for the IBM PC in 1980, and launched Windows in 1985. Since then, he has worked hard in managing the company to make it as one of the leaders in software. He has been listed many times as the richest man in the world, estimated to be worth more than $85 billion dollars. Through the Bill and Melinda Gates Foundation, they have donated over $28B in charity, and have pledged to donate half of their wealth to charity over the course of time.

Bill Gates has led Microsoft to become one of the most successful tech company in history. Today, he focuses on his philanthropic work for charitable organizations and scientific research. He is technology adviser in Microsoft, and has several investments to companies in digital imaging, nuclear reactor design, social networking site for scientists and other investments. Evan Carmichael shares in this YouTube video his ten rules for becoming successful.

Bill Gates started Microsoft with Paul Allen when he was 20 years old. Although he was not very worried in case the company goes bankrupt, because he believed he has highly employable skills, he also had certain worries. His main worry was whether the company would have enough funds to pay its employees, especially when some customers are not able to pay in time or at all. Therefore, he believed that people who are starting a company should have enough energy and excitement to take certain known risks.

2. Have A Bad Influence

Gates took a leave of absence from Harvard and later on dropped out when he started Microsoft in 1975. When he saw an opportunity and believed that it was once-in-a-lifetime, he took it even though it may seem the unconventional way. Also, he fought passionately for something or someone he believed in. He convinced Steve Ballmer, whom he met in Harvard previously, to drop out from graduate business school and join Microsoft. Eventually, Ballmer replaced Gates as CEO when Gates stepped down.

Bill Gates mentioned in one appearance that his work takes his days as well as his nights and even his weekends. His days are full of meetings. At night after his children are in bed, he replies to emails that he would received during the day. He also reads and write emails on weekends. He also travels around the world to meet customers and to get feedback. He works hard all throughout the year that he only spends 2 weeks outside this routine, when he is not interrupted by office. However, during these 2 weeks, he spends most of it reading and thinking about the future.

He introduced Windows in 1985, but commented that as early as 1983, Microsoft has already come up with the concept. He believed that a graphical user interface was the future of personal computers. He predicted it and it became a reality. In a sense, Gates was creating products not just to be slightly better than what competitors had at the time. He was thinking of the kind of technology that people would be using many years in the future. Then, he tries to bring that technology available.

5. Enjoy What You Do

Bill Gates stated in an interview that people should enjoy what they do everyday. He was successful because as head of Microsoft, he stated that he enjoyed working with smart people and working on new problems. And although they experienced some success in some areas, they tried not to dwell on it too much. Eventually, expectations go higher, or new problems arise. Therefore, people should have the stamina to continue working. And when people enjoy what they do, they can continue at it.

Bridge is a popular card game. Gates enjoy playing it because of several characteristics. He stated that Bridge helps players to think, and they can play it their entire lives to keep getting better and better. He believed that any person who is good at bridge will eventually be good in many other things as well.

Bill Gates revealed in one show that he usually talks to a small number of people when he has some ideas or some decisions to make but not entirely sure about it. He stated that he goes to these people who really knows him and knows where his judgments are not its strongest. He then asks these people for advice especially on things that he may get over-excited about. He trusts these people who are also good on correcting some of these blind spots he has. Gates also stated that it is good to encourage friends and advisers to have that license to give advice or corrections.

He recalled that some of his best business decisions were when he picked good partners. He stated that going into partnership with Paul Allen and hiring Steve Ballmer where among the best decisions he made. He recommends picking people that you can totally trust, who is very committed, shares a common vision, but also has different set of skills. They can also act as a check on your ideas and decisions. Being with these people not only made it enjoyable but also help made Microsoft successful. Thus, picking good people is crucial to have a successful company.

Bill Gates stated that as a college student, he was always doing things only in the last minute. He was labeled as the guy who did nothing until the last minute, and he thought it was funny. When he went into business, he found out that this habit is a very bad thing to have. Nobody praised him that he would something at the last minute. And so he tried to reverse this, because he is now certain that procrastination is not a good habit.

He has appeared in some commercials and videos that may appear silly for someone his stature. However, it is clear that Bill Gates does not mind looking silly, especially if for a worthy cause. He responded to Zuckerberg’s ice bucket challenge for ALS awareness. Videos of him impersonating comic movie scenes are also known. In fact, he appeared in a Microsoft commercial with comedian Jerry Seinfeld.

Bill Gates has led Microsoft in a golden era in software. However, Microsoft has also been subjected to several anti-trust litigations. As a young entrepreneur, Gates had the experience where a Microsoft product was leaked and illegally copied and distributed. He strongly believed that a software developer should be able to demand payment, and this experience may have led some of his business decisions as head of Microsoft. Each one of us can use our experience, together with these rules for success, and build a better future of ourselves and others.