AceProject Latest Enhancements as of January 2014

AceProject, in its dedication to improve functionality and user experience continuously, has made serious under-the-hood enhancements last November 2013. To remain as the premium project tracking software its customers depend on, the team behind this tool has tirelessly labored to bring the latest AceProject enhancements completed December 2013 and January 2014. With a more streamlined functionality and simplified interface, user experience has been enhanced better than ever.

When editing pages throughout the application, instead of transferring the user to a full edit page view, a pop-up dialogue box appears on top of the page to allow the user to make the changes. So, once the changes are saved, the page below the pop-up is automatically refreshed, without the user waiting for it to return, reload and refresh. Another example is the document sub-menu (see the screenshot below). When clicked, a new pop-up sub-menu appears that allows the user to preview the document if it is an image or download the document. This is quicker than going to Edit Task -> Documents, although this procedure still is possible. The ability to update multiple tasks at once is a feature that has been requested, and now is given. Your can check multiple tasks to update the statuses, the assigned users, the dates, and more. Opening one task and updating it one after another is a thing of the past.

Specific functional improvements have been made for the access rights. The Edit Task level access right has been simplified to only four options instead of seven, which are Read Only, Limited, Extended and Full. See the table below: 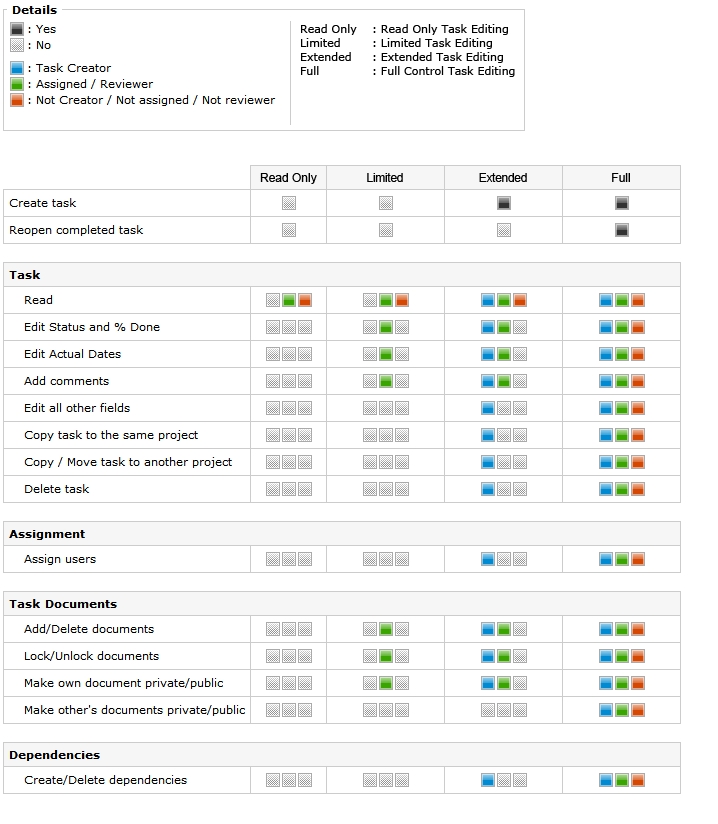 New Icons and My Personal Notes

Being streamlined and simplified does not equate to being dull. Small changes like the presence of new icons are now visible on the interface. The icons have a cleaner, refined look and have tooltip labels in case the user is wondering what the new icon is for. The latest AceProject enhancements also include a My Personal Notes feature, a notepad that is always available wherever the user may be in the application. It appears on top of any page to allow the user to copy/paste any text or information deemed important.

From a notification email, users sending a ReplyTo can attach a document to a task. Also, a quicklink has been added to the Edit Project Page just like in tasks, so that a project can be opened directly upon login. If you need a great extension to AceProject, we recommend Bridge24.com