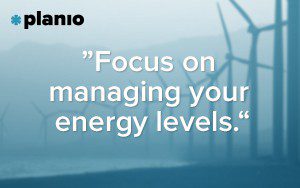 Do you feel like you could do with a few more hours each day? Unfortunately, we all get the same 24 hours each day. It’s a fixed boundary, not matter how hard you try to squeeze every last minute of productivity out of it. The famous Berlin Study published in the Psychological Review back in the early 1990s has huge implications for project managers, as knowledge workers.

The researchers dug into practice patterns of elite and average violin players at the Berlin University of the Arts. They were looking for an answer to the question: “What were the elite players doing differently? ” Was it that they put in insane hours of practice? Did they down coffee at 9 pm and play wildly into the night? What they uncovered was unusual: the elite players practiced roughly the same amount as the rest.

However, they slept an hour more per night than the average players, and they divided their practice up into two distinct chunks with a break in between. Interestingly, they also spent more time on leisure activities than the rest of the musicians. The result was that they were more relaxed, rested and less stressed. And obviously better musicians.

That’s why professional athletes like Roger Federer sleep 11-12 hours per night, and Arianna Huffington took to the TED stage to promote more sleep as a simple way for people to improve their performance. Here’s what Roger and Arianna understand: working longer hours won’t help them improve their performance. Instead, they focus on managing their energy levels, so they can focus on doing better work in the fixed time they have.

At Planio, the project management software company I work at, we’re a little different than your average Silicon valley startup. We’ve focused on creating a company culture around doing great work in less time, rather than working as many hours as possible. Last time I checked our reviews, our thousands of satisfied customers don’t seem to have a problem with that!

You, as a project manager, can lead your team to do more in less time by helping them manage their energy levels.

Big picture thinking is great, but it’s hard to get started on doing the work if that’s all you’ve got. Leaving your team with vague, imprecise goals means that they’ll spend their time going around in circles. That’s why breaking down abstractions into specific tasks is so important. You’re clearing the way for your team to actually get things done.

In The Power of Full Engagement, Tony Schwartz argues that top performers uses “positive rituals to manage their energy and regulate their behavior’. Sports people often have highly specific routines before big games to help them focus in and perform under pressure. Project managers can borrow from rituals of the Agile world such as the daily stand-up or weekly retrospectives. They help focus the team on the work to be done for that day.

Work in Lots of Sprints, not in One Long Marathon

The concentration required for modern knowledge work means that you need to take frequent breaks. One approach recommended by the Pomodoro Technique is to work for 25 minutes and then take a five-minute break. Then, every two hours, you take a longer 30 minute break. For other people, longer periods of focus work better. However, taking breaks means that you have time to recoup your energy and reassess your progress.

The lazy approach to management is to make sure that everyone is staring intently at Excel sheets and then relax in the knowledge that your team is working hard. Obviously, that’s a flawed approach, but it’s one that many companies unconsciously adopt. Project managers should strive to create a culture where it’s entirely acceptable to say, “I’ve got a tough problem I’m working on. I’ll take a walk to think about it “.

Walking as a work tactic is one that Steve Jobs and Mark Zuckerberg have both adopted, and a recent Stanford study showed that a person’s creative output increased by an average of 60 percent when walking.

Multi-tasking is the perfect storm of reduced efficiency and wasting energy. You’re torn in different directions by competing demands on your attention, so you end up doing everything to a sub-par level. Research has shown that multi-taskers are, in fact, repeatedly switching between tasks. This switching carries a cost, because you expend energy every time you switch, costing you up to 40% of your productive time according to one study.

You can consider reducing distractions in the office by creating “no meetings Wednesdays “. At Planio, we have only one fixed weekly meeting, for example. You can even re-think open-plan offices, so your team doesn’t waste as much energy switching between interruptions and real work.

It’s easy to focus on making sure your teams spends the maximum possible time in their seats. But you’ll build a far more valuable team if you focus on helping them reach peak performance. Particularly project managers focused on realizing ambitious, world-class projects need teams that perform at elite levels. And that means working like those elite violin players in Berlin.

Thomas Carney writes about project management and productivity. After graduating from law and linguistics in Ireland, he started working on a European Commission-funded project on multilingual legal content in Munich. He's since worked for technology companies in Paris and now Berlin.